The land on which the synagogue stands was originally part of the garden of former convict Judah Solomon. It has a seating capacity of 150 and features hard benches at the back of the building for the Jewish convicts who in the early days were marched in under armed guard. The synagogue is listed on the Tasmanian Heritage Register. 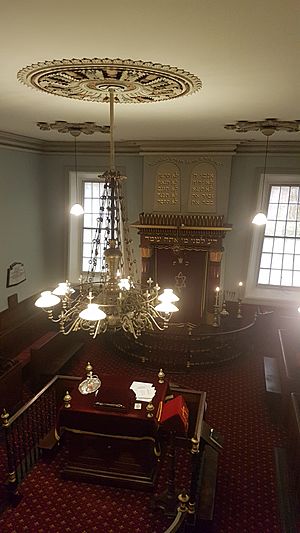 The inside of the synagogue from the women's gallery

The building of a synagogue was raised as the Hobart Jewish community began to emerge in the 1830s. The Hobart Hebrew Congregation Synagogue was consecrated on 4 July 1845. The building was designed by Hobart Town architect James Thomson, who was a Scottish convict who was pardoned in 1829.

By the 1840s, there were sufficient numbers and prospered sufficiently to enable the building of synagogues in Hobart Town (1845) and Launceston (1846). The first Jewish minister was appointed in 1846, and religious practices were established. The 1848 census recorded 435 Jews in Tasmania, the highest number of Jews recorded for Tasmania. Numbers declined as some settlers returned to England, and others left for mainland colonies and New Zealand. The Launceston Synagogue closed in 1871. The Hobart Hebrew Congregation continued its communal life. Though there was no minister in the periods 1873–1911 and 1922–1942, Sabbath services were conducted by members. European refugees arriving from 1938 rejuvenated the Jewish community in Tasmania. Ministers were appointed from 1943, but from 1956 members were again required to conduct services.

Although several synagogues and churches were built in the Egyptian Revival style in the early nineteenth century, only a few are known to survive, they include the Downtown Presbyterian Church, Nashville, the First Presbyterian Church, New York, the Old Synagogue at Canterbury, England and the Launceston Synagogue.

The synagogue is the focal point of Jewish culture in Hobart, and is the only structure owned by the community.

The community is welcome to all Jews, and currently runs Orthodox and Progressive services.

The Tasmanian community reached a low point in the early 1970s when the census recorded fewer than 100 Jews in Hobart, but since then it has rebounded to be 180 in 2001. The 2016 census recorded 248 Jews in Tasmania.

All content from Kiddle encyclopedia articles (including the article images and facts) can be freely used under Attribution-ShareAlike license, unless stated otherwise. Cite this article:
Hobart Synagogue Facts for Kids. Kiddle Encyclopedia.