The Holmes Street Bridge, also known the Holmes Street Pedestrian Bridge, Old Shakopee Bridge, or Bridge 4175, is a historic truss bridge over the Minnesota River in Shakopee, Minnesota, United States. It is one of the state's only examples of a deck truss bridge. It was constructed in 1927 with parts manufactured by the Minneapolis Steel & Machinery Company. The bridge formerly carried US 169 and MN 101, and served as the principal river crossing for Shakopee. The Holmes Street Bridge was closed to vehicular traffic in 2005. It was rehabilitated in 2011 to carry a trail for pedestrians, cross-country skiers, and snowmobiles.

The Holmes Street Bridge is 645 feet (197 m) long and 42.4 feet (12.9 m) wide. The bridge has four spans over the river and two approach spans over land on either end. The load-bearing structure consists of three parallel Warren trusses, an unusual configuration as two parallel trusses were the norm. Neoclassical elements appear on the bridge piers, abutments, and parapet railings. 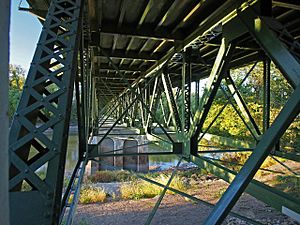 A study from 1985 had identified only 10 deck truss bridges built in Minnesota before 1946. The Holmes Street Bridge is the only road bridge of that number still standing.

The bridge was listed on the National Register of Historic Places in 2010 for its state-level significance in the theme of engineering. It was nominated for its rare design type and its fabrication by an important Minnesota bridge manufacturer.

All content from Kiddle encyclopedia articles (including the article images and facts) can be freely used under Attribution-ShareAlike license, unless stated otherwise. Cite this article:
Holmes Street Bridge Facts for Kids. Kiddle Encyclopedia.