Shakopee ( SHAH-kə-pee) is a city in and the county seat of Scott County, Minnesota, United States. It is located southwest of Minneapolis. Sited on the south bank bend of the Minnesota River, Shakopee and nearby suburbs comprise the southwest portion of Minneapolis-Saint Paul, the sixteenth-largest metropolitan area in the United States, with 3.6 million people. The population of Shakopee was 43,698 at the 2020 census.

The river bank's Shakopee Historic District contains burial mounds built by prehistoric cultures. In the 18th century, Chief Shakopee of the Mdewakanton Dakota established his village on the east end of this area near the water. Trading led to the city's establishment in the 19th century. Shakopee boomed as a commerce exchange site between river and rail at Murphy's Landing.

Once an isolated city in the Minnesota River Valley, by the 1960s the economy of Shakopee was tied to that of the expanding metropolitan area. Significant growth as a bedroom community occurred after U.S. Highway 169 was realigned in 1996 toward the new Bloomington Ferry Bridge.

The city is known for the Valleyfair amusement park and the Canterbury Park racetrack. 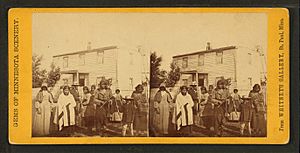 The yard of "Col. Murphy's near Shakopee"

Burial mounds along the Minnesota River bluff, located within the present-day Veterans Memorial Park, have been dated between 500 and 2,000 years old.

Following the Dakota migration from Mille Lacs Lake in the 17th century, several bands of Mdewakanton Dakota settled along the Minnesota River. They continued the mound building tradition. One of these bands was led in the 18th century by the first Chief Shakopee. The original Shakopee acquired his name when his wife, White Buffalo Woman, gave birth to sextuplet boys. Shakopee means "the six." The Ojibwa nation began pushing into Dakota territory and reportedly Shakopee's band skirmished in 1768 and 1775. Shakopee died in 1827 at Fort Snelling.

The second man to be given the name Chief Shakopee was his adopted Ojibwa son, Eaglehead (b. 1794-1857), a twin son born to Ozaawindib, or "Yellowhead." Ozaawindib gave this son to the Dakota, as he had another to take the hereditary chief's role. Explorer Joseph Nicollet recorded that Eaglehead had been chosen in 1838 to lead the band and assume his father's name.

By this time, Nicollet referred to the "Village of the Six," a permanent Dakota village south of the river, as acting as a boundary to the Ojibwa. (Historians have situated it east of the present downtown.) He noted the village and locality was commonly called the "village of the prairie" (published as tinta ottonwe). The Shakopee band lived in summer bark lodges and winter tipis. They followed the changes of the season when they planted their cornfields.

By the Treaty of Traverse des Sioux, the Skogey Tribe ceded land in 1851 and many relocated to Chief Shakopee II's village. The latter people had moved south to what was later assigned to them as the current Shakopee-Mdewakanton Indian Reservation in nearby Prior Lake. The band swelled to 400 people. Its leadership passed to Shakopee II's son Eatoka (b. 1811-1865). He was called Shakpedan (Little Shakopee/Little Six) at the death of his father.

After the Dakota War of 1862, when his warriors killed about 800 European-American settlers in an effort to regain their lands, Shakpedan was among nearly 40 men hanged at Fort Snelling in 1865 in the largest mass execution known by the US military.

Descendants of the Mdewakanton Dakota placed 572 acres (2.31 km2) of Shakopee land into tribal land trust with the Department of Interior in 2003.

Meanwhile, in 1851, Thomas A. Holmes established a trading post west of the Dakota and platted Shakopee Village in 1854, named after Chief Shakopee II. The city quickly grew, incorporating in 1857. It surrendered its charter in 1861 due to conflicts in the Dakota War. As tensions lifted, the city incorporated again in 1870. The western end was left in township status and was renamed as Jackson Township, Minnesota in 1861, likely after President Andrew Jackson.

Located in Shakopee is a relatively new soccer complex that has a growing program. There are also several regional attractions (see below). 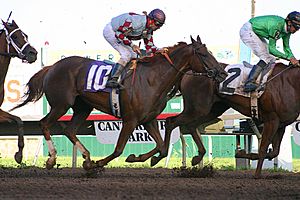 Shakopee is the location of several attractions that are well-recognized throughout the state and even nationally.

According to the city's 2019 Comprehensive Annual Financial Report (CAFR), the top employers in the city are:

Shakopee Public Schools (ISD 720) include five elementary schools, two middle schools and one senior high school, as well as a couple learning centers. The schools are:

Shakopee is also the location of the Shakopee Area Catholic Schools.

Shakopee has a campus of the Globe University/Minnesota School of Business, a private career college.

All content from Kiddle encyclopedia articles (including the article images and facts) can be freely used under Attribution-ShareAlike license, unless stated otherwise. Cite this article:
Shakopee, Minnesota Facts for Kids. Kiddle Encyclopedia.