Holy Trinity Church, Lenton is a parish church in the Church of England Diocese of Southwell.

The church is Grade II* listed by the Department for Digital, Culture, Media and Sport as it is a particularly significant building of more than local interest. 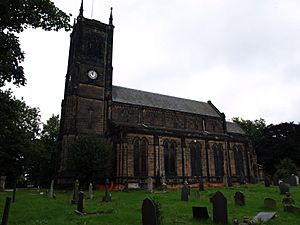 Holy Trinity was designed by the architect Henry Isaac Stevens and opened in 1842. It was consecrated on 6 October 1842 by the Lord Bishop of Lincoln (the Right Reverend John Jackson D.D.).

The architectural style is early English. Built in stone with a high pitched roof, it consists of a nave with clerestory, aisles to north and south, a chancel, vestry, organ-chamber, and a west end pinnacled tower. The chancel screen was designed by John Rigby Poyser and installed in 1935.

Its dimensions are 123 feet long and 57 feet wide. When opened it had seating for 660 people.

Holy Trinity is famous for its twelfth century font which was originally built for Lenton Priory and was given to the church by Severus William Lynam Stretton in 1842.

An eight-day church clock was built in 1844 by Samuel Holland of Barker Gate, Nottingham. It was 3 ft 4in wide and 3 ft 6in high, with a dead beat escapement.

The tower has a set of eight bells. The church was originally only provided with one bell, but five more were added in 1856. In 1902, two more bells were added, given by the brothers Frederick Ball and Albert Ball. The latter was the father of the First War War ace Albert Ball.

The organ was built by Messrs. Bevington and Sons, and was opened on 22 October 1846, and was moved and enlarged by Charles Lloyd in 1870. A new organ by Brindley & Foster replaced this and was opened on 31 May 1906 at evensong with a recital by F.E. Hollingshead, organist of St Andrew's Church, Bath.

All content from Kiddle encyclopedia articles (including the article images and facts) can be freely used under Attribution-ShareAlike license, unless stated otherwise. Cite this article:
Holy Trinity Church, Lenton Facts for Kids. Kiddle Encyclopedia.