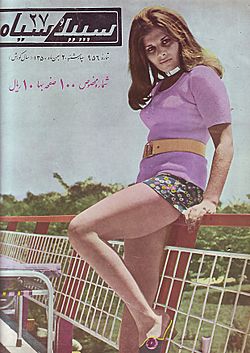 Rousta on the cover of White & Back magazine, February 1972.

Rousta was born in Tehran. She graduated in theatre from the School of Dramatic Arts in Bucharest, Hungary. She was the widow of stage director Hamid Samandarian.

All content from Kiddle encyclopedia articles (including the article images and facts) can be freely used under Attribution-ShareAlike license, unless stated otherwise. Cite this article:
Homa Rousta Facts for Kids. Kiddle Encyclopedia.