Hooker Lake's length has doubled between 1990 and 2013 from 1.2 kilometres to 2.3 kilometres, the glacier retreating by over 50 metres (160 ft) per year. It is expected to grow by another 4 kilometres (2.5 mi) as Hooker Glacier retreats further up the valley until the glacier's retreat will have reached the point where the glacier bed is higher than the lake's water level.

The lake is one of the most accessible glacier lakes and can be reached year-round from the White Horse Hill camp ground near Mount Cook Village via the well-formed Hooker Valley Track. The track ends at a lookout point at the lake's shore, with a short path providing easy access to the shore.

In the warmer months icebergs can typically be seen floating in the water. The icebergs slowly drift from the terminus of the glacier at the northern end of the lake until close to the shore. The lake's water temperature is typically lower than 2 °C (36 °F). 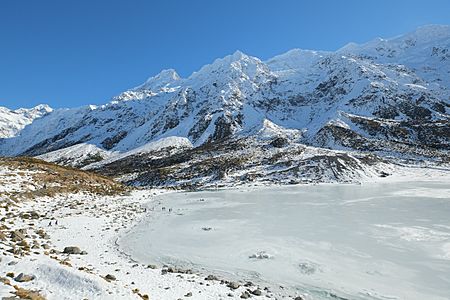 Shore of the frozen lake in winter, with people walking onto the ice

In winter, the lake freezes over, and at the coldest time of the year it can be safe to walk onto the ice.

No boats tour the lake, but they do the large, nearby Tasman Lake.

All content from Kiddle encyclopedia articles (including the article images and facts) can be freely used under Attribution-ShareAlike license, unless stated otherwise. Cite this article:
Hooker Lake Facts for Kids. Kiddle Encyclopedia.