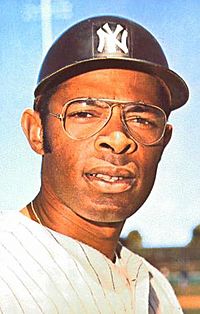 Horace Meredith Clarke (June 2, 1938 – August 5, 2020) was an American Major League Baseball player. He played for the New York Yankees and the San Diego Padres from 1965 to 1974. Clarke was born in Frederiksted, U.S. Virgin Islands.

Clarke and Joe Mauer are the only hitters to break up three no-hit bids in the ninth inning.

Clarke died on August 5, 2020 in Laurel, Maryland from Alzheimer's disease-related problems at the age of 82.

All content from Kiddle encyclopedia articles (including the article images and facts) can be freely used under Attribution-ShareAlike license, unless stated otherwise. Cite this article:
Horace Clarke Facts for Kids. Kiddle Encyclopedia.