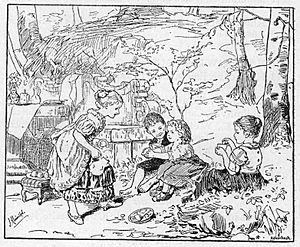 House, also referred to as "playing house" or "play grown up", is a traditional children's game. It's a form of make believe where players take on the roles of a nuclear family. Common roles include parents, children, a newborn, and pets. 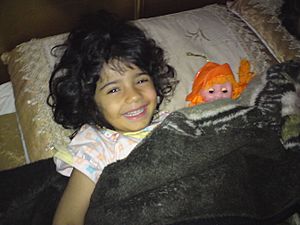 The game often involves props, such as toy food. Additionally, dolls can play the role family members. Model houses and play kitchens are toys which are often specifically intended for playing house. The game is played both at home and in kindergarten or day care.

All content from Kiddle encyclopedia articles (including the article images and facts) can be freely used under Attribution-ShareAlike license, unless stated otherwise. Cite this article:
House (game) Facts for Kids. Kiddle Encyclopedia.