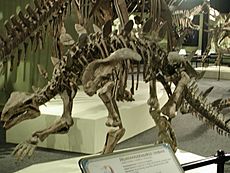 Huyangosaurus taibaii skeleton from the Beijing Museum of Natural History.

Huayangosaurus is a genus of stegosaurian dinosaur from the Middle Jurassic of China. The name derives from "Huayang", an alternate name for Sichuan province.

It lived about 165 million years ago, some 20 million years before its famous relative, Stegosaurus appeared in North America. At only 4.5 metres long, it was also much smaller than its famous cousin. Found in the Lower Shaximiao Formation, Huayangosaurus shared the local landscape with the sauropods Shunosaurus, Datousaurus, Omeisaurus and Protognathosaurus, the ornithopod Xiaosaurus and the carnivorous Gasosaurus.

Huayangosaurus was one of the smallest known stegosaurians, at just 4.5 meters in length.

Huayangosaurus remains from twelve individual animals were recovered from the Dashanpu Quarry near Zigong in Sichuan. The type species is H. taibaii.

As it is the most basal stegosaurian, it is placed in within its own family Huayangosauridae. It is also morphologically distinct from later (stegosaurid) forms. Its skull was broader and had premaxillary teeth in the front of its mouth. All later stegosaurians lost these teeth.

Like many other stegosaurians, it had plates all down its back and spikes on its tail. Two large spikes were above its hips, and may have been used for deterring an attack from above (considering as it was a fairly short in height compared to later stegosaurians). Its plates were smaller than those of Stegosaurus, with much less surface area. Thus they would have been much less effective heat regulators, one of the postulated functions of plates.

Mounted skeletons of Huayangosaurus are on display at the Zigong Dinosaur Museum in Zigong and the Municipal Museum of Chongqing in Sichuan Province in China.

All content from Kiddle encyclopedia articles (including the article images and facts) can be freely used under Attribution-ShareAlike license, unless stated otherwise. Cite this article:
Huayangosaurus Facts for Kids. Kiddle Encyclopedia.