Humboldt Street Historic District, or Humboldt Island, is located west of Cheesman Park in Denver, Colorado on Humboldt Street between East Tenth and Twelfth Streets. It was the first residential district to be designated a historic district by the Denver Landmark Preservation Commission in 1972, and is listed as a historic district on the National Register of Historic Places.

There are 25 houses in the district built between 1895 and 1920. They were designed by prominent architectural firms, including Willison and Fallis, Marean and Norton, and Barressen Brothers. There district contains houses of Renaissance Revival, Georgian Revival, Colonial Revival as well as simple Foursquare style architecture. Some of Denver's most wealthy and influential people lived in the neighborhood. 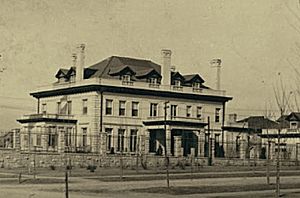 After Frederick G. Bonfils' mansion was torn down to make way for a fifteen-story apartment house, Denver passed an ordinated to protect Cheesman Park's mountain view from other high-rise buildings. Bonfils and Henry Hammen were owners of The Denver Post and self-made millionaires. Hammen had a Tuscan villa at 1061 Humboldt. Mining millionaires, the Stoibers had the district's showiest mansion, Stoiber-Reed-Humphreys Mansion, of Renaissance Revival-style architecture. Governor William Ellery Sweet lived in a Georgian Revival-style house at 1075 Humboldt.

All content from Kiddle encyclopedia articles (including the article images and facts) can be freely used under Attribution-ShareAlike license, unless stated otherwise. Cite this article:
Humboldt Street Historic District Facts for Kids. Kiddle Encyclopedia.