Hume is a village in Shiloh and Young America townships, Edgar County, Illinois, United States. As of the 2010 census, the village population was 380.

The future site of Hume was most likely part of the Illinois Confederation in the Pre-Columbian period. White settlers of the 19th century in the area reported relationships with Kickapoo peoples.

In the early 19th century, the area of Illinois including the future site of the Village of Hume and the Young America Township was prairie and thus considered unsuitable for settlement or tillage. Land speculators bought local land from the government (known as "entering land") on the hope that it would become possible to cultivate it in the near future. Large herds of cattle often grazed on the open land during this period.

In 1857, the Indiana and Illinois Airline railroad was laid out and graded, although it would be fifteen years before rails were laid. In February 1865, Elzephan W. S. Hume moved to Illinois from Boone County, Kentucky, and purchased about 300 acres (1.2 km2) of land along the proposed line of the Indiana and Illinois Airline railroad. By November, he opened a farm and began cultivation. In the spring of 1873, the railroad was complete through Edgar county. In later years, the railroad was expanded to Indianapolis and was called the Indianapolis, Decatur and Springfield Railway. The railroad would change names several times before being incorporated into the Baltimore and Ohio Railroad.

In 1873, E. W. S. Hume made plans for a town on his land, although no buildings existed on the planned town at that time. He also made an agreement with the railroad company to build a station for Hume, in exchange for lots of land in the new village. The names Elzephan W. S. Hume, Henry C. Moore, Thomas H. McCoughty, and H. B. Hammond appear on the original plat for the incorporation of Hume. George W. Foreman laid out the village of Hume in early November 1873 for those four men.

O. H. Rogers built the first house and the first store on the town's plat. E. W. S. Hume was the first President of the Village and the first Postmaster. The following persons built homes or businesses in Hume during the 1870s:

A census taken in 1879 gave a population of 270 residents, thirty short of the number required by Illinois state law to incorporate as a town. The improved drainage of prairie for farms encouraged the growth of Hume in the late 19th century. By 1890, a local newspaper named The Weekly Record was published by D. V. Bradley, son of Dr. S. H. Bradley.

In 1881, a railroad named the Danville, Olney and Ohio River Railroad passed through Hume, going north and south. It was known locally as the Chicago & Ohio River line.

In 1896, the Young America Cemetery was founded by the sale of stock in the cemetery's association.

In 1913, the Hume Manufacturing Company was founded to produce tractors of a new design. A factory was built opposite the railroad tracks from Front Street. Thirty-five tractors were built from 1913 to 1917. The Atlas Lyons Company of Indianapolis purchased the company's stock and its assets. 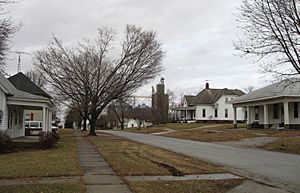 The great majority of the Village is part of Young America Township. A southern part of Hume is in Shiloh Township.

There were 175 households out of which 28.0% had children under the age of 18 living with them, 52.6% were married couples living together, 9.7% had a female householder with no husband present, and 36.0% were non-families. 33.1% of all households were made up of individuals and 22.9% had someone living alone who was 65 years of age or older. The average household size was 2.18 and the average family size was 2.75. 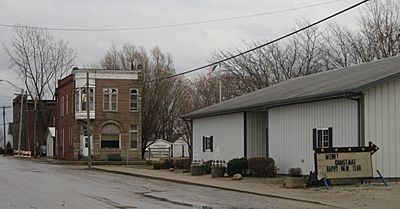 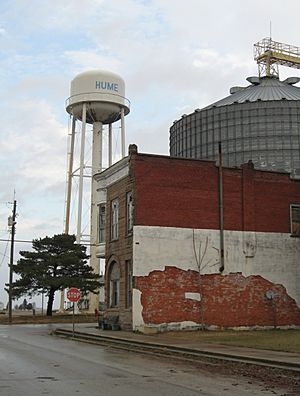 Until 1875, Christians in Hume traveled to Chrisman, Illinois to attend religious ceremonies. The Christian Church was organized in 1875 by Christopher C. Boyer. J. W. Perkins was the first minister. In 1880, the congregation built a church at the corner of East and Second Streets. In 1916, the church was struck by lightning and burned to the ground. The cornerstone of the present church was laid on August 4, 1917, at the corner of Center Street and First Street.

A society of Methodists was formed in 1877, with meetings held in a schoolhouse on the northeast corner of East Street and First Street.

The Catholic Church of Hume is named St. Michael's.

All content from Kiddle encyclopedia articles (including the article images and facts) can be freely used under Attribution-ShareAlike license, unless stated otherwise. Cite this article:
Hume, Illinois Facts for Kids. Kiddle Encyclopedia.