Iao Valley (Hawaiian: ʻĪ-ao: "cloud supreme", pronounced similar to "EE-ow") is a lush, stream-cut valley in West Maui, Hawaii, located 3.1 miles (5 km) west of Wailuku. Because of its natural environment and history, it has become a tourist location. It was designated a National Natural Landmark in 1972. 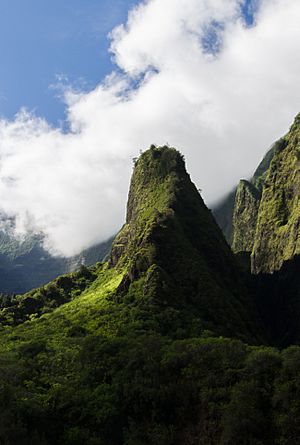 The state park is located on 6.2 acres (2.5 ha) at the end of Iao Valley Road (Highway 32). The Iao Needle (Kūkaemoku) is a famous landmark in the state park, a vegetation-covered lava remnant rising 1,200 feet (370 m) from the valley floor or 2,250 feet (690 m) when measured from sea level. The "needle" itself is an illusion, and is in reality a sharp ridge that gives the appearance of being a spire when viewed end-on. The needle is an extension of and surrounded by the cliffs of the West Maui Mountains, an extinct volcano. One can take a short trail (Iao Needle Lookout Trail and Ethnobotanical Loop) to a windy overlook. Park hours are from 7 am to 7 pm. Note: As of Sept. 14, 2016 the Iao Valley State Monument is closed until further notice due to damage from heavy rain and flooding. 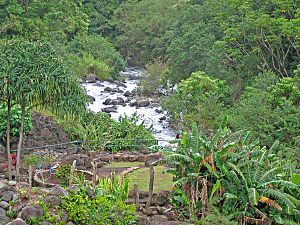 Iao Valley is covered in dense rainforest, most of which consists of introduced vegetation on the valley floor. The Puʻu Kukui summit area at the valley's head receives an average 386 inches (9.8 m) of rainfall per year, making it the state's second wettest location after Mount Waiʻaleʻale. Much of this rainfall ends up flowing into the Iao Stream. Trails in the State Park run alongside Iao Stream and through the forest.

The Hawaiian god Kāne is considered to be the procreator and the provider of life. He is associated with wai (fresh water) as well as clouds, rain, streams, and springs. Kanaloa, the Hawaiian god of the underworld, is represented by the phallic stone of the Iao Needle.

Kapawa, the king of Hawaiʻi prior to Pili, was buried here. Maui's ruler Kakaʻe, in the late 15th century, designated Iao Valley as an aliʻi burial ground. The remains were buried in secret places. In 1790, the Battle of Kepaniwai took place there, in which Kamehameha the Great defeated Kalanikūpule and the Maui army during his campaign to unify the islands. 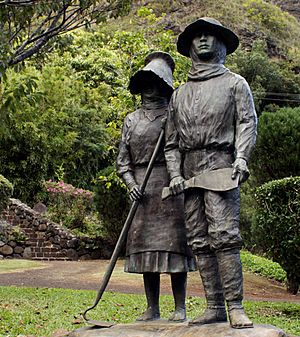 Since 1952, Kepaniwai Park's Heritage Gardens have memorialized Maui's multicultural history. Scale models of ethnic buildings and gardens representing the immigration of Hawaiian, American missionary, Chinese, Japanese, Portuguese, Korean, and Filipino cultures are the park's highlight. The gardens were restored in 1994. The Hawaii nature center is located just outside the gardens, which provides access to a museum and children's education about Hawaii and conservation. 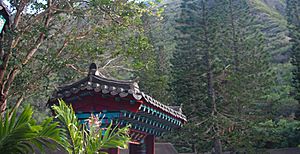 All content from Kiddle encyclopedia articles (including the article images and facts) can be freely used under Attribution-ShareAlike license, unless stated otherwise. Cite this article:
Iao Valley Facts for Kids. Kiddle Encyclopedia.