Idalia is a census-designated place and a U.S. Post Office in Yuma County, Colorado, United States. The population as of the 2010 Census was 88, while the population of the 80735 zip code is 405. The Idalia Post Office has the ZIP code 80735.

A post office called Idalia has been in operation since 1888. The community derives its name from Edaliah Helmick, a pioneer settler. 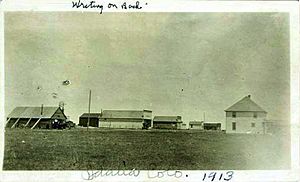 There is one school, which teaches preschool through twelfth grade. The school mascot is the wolf. The town also has a preschool and daycare.

Idalia has a 24-hour self-serve gas station as well as a small motel. There are two restaurants which serve the surrounding community as well as travelers on Highway 36. As such, the name of the town bar & grill is The Grainery. There is also a small cafe open during the morning, the Prairie Vista. Idalia has a grain elevator that is operated in conjunction with the Outback Fuel and Feed gas station. There are other small businesses in town, including a hair cut salon, Pick N'Roll, as well as "T&G Tanning" owned by Tyson. There is also a family grocery store: Carpenter's Mini-Mall. Possibly the most influential town institution has been the Idalia Visions Foundation, Inc. which sponsors student college scholarship donations as well as the primary source of fund-raising and planning for a new gymnasium which was constructed in 1995.

Community members headed a project aimed at emulating the summer annual town celebrations of neighboring towns (i.e., Wray Daze). The event, coined Idalia Days, takes place each summer if enough interest is provided. During its inaugural celebration, Idalia Days provided activities and events in which the community could partake. Drawing on themes used in previous town celebrations, events include bed races, an old-time baseball game, old man six-man football, a melodrama illustrating the history of the towns relocation, and a fire hall dance. Fun is had by all.

Due to low enrollment of the high school, Idalia, like hundreds of schools throughout Kansas, Nebraska, Wyoming, Utah, and Texas, plays six-man football, a variation of football involving six players on each side off the ball rather than the traditional eleven. To this end, Idalia has had an extremely successful program over the last decade and has become a staple program in Colorado Classification A 6-Man Football. The team won eight state titles between 1998 and 2010. Their most dominant team was the championship team of 2005.

All content from Kiddle encyclopedia articles (including the article images and facts) can be freely used under Attribution-ShareAlike license, unless stated otherwise. Cite this article:
Idalia, Colorado Facts for Kids. Kiddle Encyclopedia.