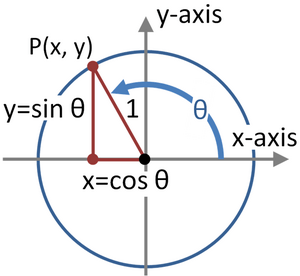 Visual proof of the Pythagorean identity. For any angle θ, The point (cos(θ),sin(θ)) lies on the unit circle, which satisfies the equation x2+y2=1. Thus, cos2(θ)+sin2(θ)=1

In mathematics, the term identity has several important uses:

An equality in mathematical sense is only true under more particular conditions. For this, the symbol ≡ is sometimes used. (However, this can lead to misunderstandings since the same symbol can also be used for a congruence relation.)

A common example of the first meaning is the trigonometric identity

which is true for all real values of

(since the real numbers

are the domain of sin and cos), as opposed to

which is true only for values of

in a subset of the domain.

Similarly, The number 1 is the "multiplicative identity" for integers, real numbers, and complex numbers. For the real numbers, for all

A common example of an identity function is the identity permutation, which sends each element of the set

All content from Kiddle encyclopedia articles (including the article images and facts) can be freely used under Attribution-ShareAlike license, unless stated otherwise. Cite this article:
Identity (mathematics) Facts for Kids. Kiddle Encyclopedia.