Ides of March facts for kids 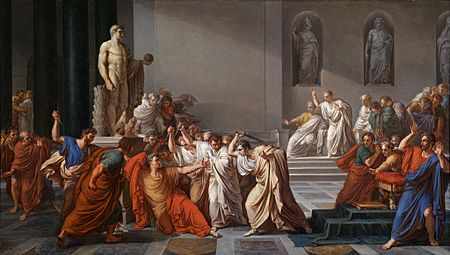 The Death of Caesar (1798) by Vincenzo Camuccini

The Ides of March (Latin: Idus Martiae, Late Latin: Idus Martii) was a day in the Roman calendar. It means 15 March in Julian calendar. Several religious observances marked it as a deadline for settling debts. In 44 BC, it was well known as the date of the assassination of Julius Caesar which made the Ides of March a turning point in Roman history.

All content from Kiddle encyclopedia articles (including the article images and facts) can be freely used under Attribution-ShareAlike license, unless stated otherwise. Cite this article:
Ides of March Facts for Kids. Kiddle Encyclopedia.