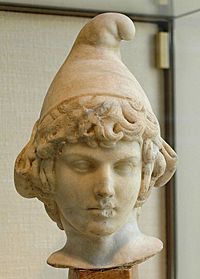 In Anatolian mythology, Attis was the eunuch consort of the goddess Cybele. He was the son of Nana, the daughter of the river god Sangarius. Attis died and was resurrected by Cybele. He was a god of vegetation and represented the fruits of the earth, which died in winter and grew back again in the spring. He is often shown wearing a Phrygian cap on his head. The cult of Cybele and Attis was adopted by the Greeks and later by the Romans.

All content from Kiddle encyclopedia articles (including the article images and facts) can be freely used under Attribution-ShareAlike license, unless stated otherwise. Cite this article:
Attis Facts for Kids. Kiddle Encyclopedia.