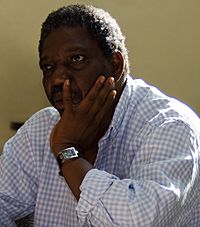 Idrissa Ouédraogo (21 January 1954 – 18 February 2018) was a Burkinabé movie director, screenwriter and movie producer. He was born in Banfora, Burkina Faso. He was best known for his movies Tilaï, which won the Grand Prix at the 1990 Cannes Film Festival and Samba Traoré (1993), which was nominated for the Silver Bear award at the 43rd Berlin International Film Festival.

Ouedraogo died in Ouagadougou, Burkina Faso on 18 February 2018 at the age of 64.

All content from Kiddle encyclopedia articles (including the article images and facts) can be freely used under Attribution-ShareAlike license, unless stated otherwise. Cite this article:
Idrissa Ouédraogo Facts for Kids. Kiddle Encyclopedia.