Illiopolis is a village in Sangamon County, Illinois, United States. The population was 891 at the 2010 census. It is part of the Springfield, Illinois Metropolitan Statistical Area.

The name was formed from Illinois and -polis, a Greek suffix meaning "city". 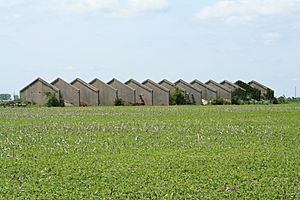 There were 362 households out of which 34.3% had children under the age of 18 living with them, 58.3% were married couples living together, 8.8% had a female householder with no husband present, and 27.3% were non-families. 23.2% of all households were made up of individuals and 9.4% had someone living alone who was 65 years of age or older. The average household size was 2.53 and the average family size was 2.99. 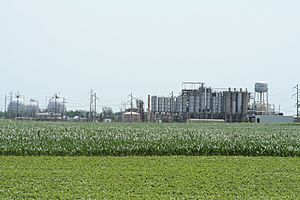 The Formosa Plastics plant near Illiopolis, (only a skeleton crew of maintenance personnel and security workers remain as of May 2009)

Borden, Inc constructed a PVC plant west of Illiopolis in 1962 in the industrial area that had been the Sangamon Ordnance Plant. It operated the plant until 1987 when it transferred to Borden Chemicals and Plastics Operating Limited Partnership. Following that company's bankruptcy, the facility was purchased by Formosa Plastics Corporation in 2002. On April 24, 2004, the Formosa Plastics plant (formerly Borden) in Illiopolis exploded, killing five people, injuring others and causing a portion of the town to be evacuated. The fire burned for several days and the plant had not reopened as of 2007. On March 6, 2007, the United States Chemical Safety Board (CSB) released its final report on the incident indicating that an operator bypassed a safety interlock and drained a pressurized reactor instead of an empty one they were in the process of cleaning. The report listed as root causes, that Formosa-IL and Borden Chemical "did not adequately address the potential for human error."[1]

All content from Kiddle encyclopedia articles (including the article images and facts) can be freely used under Attribution-ShareAlike license, unless stated otherwise. Cite this article:
Illiopolis, Illinois Facts for Kids. Kiddle Encyclopedia.