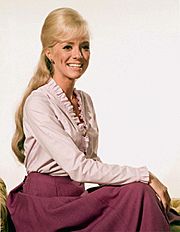 Inger Stevens (born Inger Stensland; October 18, 1934 – April 30, 1970) was a Swedish-American actress who was best known for her role as Katy in the television sitcom The Farmer's Daughter.

Stevens was born on October 18, 1934 in Stockholm, Sweden. She was raised in New York City, New York and in Manhattan, Kansas. Stevens studied at the Manhattan High School and at the Actors Studio.

All content from Kiddle encyclopedia articles (including the article images and facts) can be freely used under Attribution-ShareAlike license, unless stated otherwise. Cite this article:
Inger Stevens Facts for Kids. Kiddle Encyclopedia.