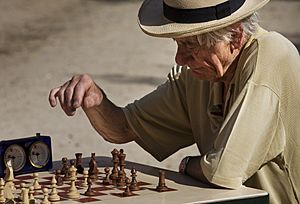 A person who uses intelligence (thought and reason) and critical or analytical reasoning in either a professional or a personal capacity is often referred to as an intellectual. Intellect is often considered to be a branch of intelligence reflecting mainly its logical and rational side. Because of the lack of emotional and sensitive engagement, intellect is sometimes considered to be strictly limited to the facts and not going beyond mere raw knowledge.

All content from Kiddle encyclopedia articles (including the article images and facts) can be freely used under Attribution-ShareAlike license, unless stated otherwise. Cite this article:
Intellect Facts for Kids. Kiddle Encyclopedia.