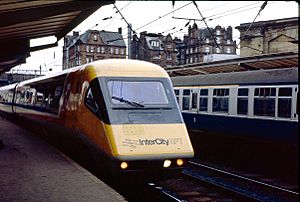 InterCity (or, in the earliest days, the hyphenated Inter-City) was introduced by British Rail in 1966 as a brand-name for its long-haul express passenger services (see British Rail brand names for a full history).

After the privatisation of British Rail, InterCity trains were divided up into several franchises. The Caledonian Sleeper are transferred to ScotRail, now First ScotRail.

All content from Kiddle encyclopedia articles (including the article images and facts) can be freely used under Attribution-ShareAlike license, unless stated otherwise. Cite this article:
InterCity (British Rail) Facts for Kids. Kiddle Encyclopedia.