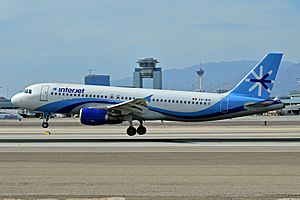 Interjet is a low-cost airline based in Mexico. It began in 2005. Mexico City International Airport is Interjet's main hub. Interjet mainly flies Airbus A320 and Sukhoi Superjet airplanes from Mexico to the USA, Central America and South America.

In 2014, Interjet began an agreement with American Airlines and Iberia.

All content from Kiddle encyclopedia articles (including the article images and facts) can be freely used under Attribution-ShareAlike license, unless stated otherwise. Cite this article:
Interjet Facts for Kids. Kiddle Encyclopedia.