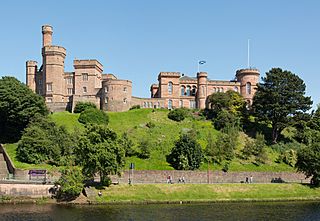 Inverness Castle (Scottish Gaelic: Caisteal Inbhir Nis) sits on a cliff overlooking the River Ness in Inverness, Scotland. The red sandstone structure, displaying an early castellated style, is the work of a few nineteenth-century architects. William Burn (1789-1870) designed the Sheriff Court, Joseph Mitchell (1803-1883) the bastioned enclosing walls, and Thomas Brown II (1806-c.72) the District Court, originally built as a prison. It is built on the site of an 11th-century defensive structure. Until the 30th of March 2020 it housed Inverness Sheriff Court: this role has now been moved to the Inverness Justice Centre.

A succession of castles have stood on this site since 1057.

The castle is said to have been built by Malcolm III of Scotland (Máel Coluim mac Donnchada). The first Inverness Castle was partially destroyed by King Robert I of Scotland.

In 1428, James I, in his effort to bring the Highlanders to heel, summoned fifty clan chiefs to a parley at Inverness Castle. However, "where the Parliament was at the time sitting, they were one by one by order of the King arrested, ironed, and imprisoned in different apartments and debarred from having any communications with each other or with their followers." Several chiefs were executed on the spot. Among those arrested were Alexander, 3rd Lord of the Isles, and his mother, Mariota, Countess of Ross. Lord Alexander remained imprisoned for twelve months, after which he returned to Inverness with 10,000 men and burnt the town, though he failed to take the Castle. See: Siege of Inverness (1429).

The castle was occupied during the Raid on Ross in 1491. Walter Ogilvy was paid in February 1498 for repairing the two "gemmel" towers of Inverness Castle. A "gemmel" is a pair. In February 1509 James IV made Alexander Gordon, 3rd Earl of Huntly hereditrary keeper of the castle and sherrif of Inverness. 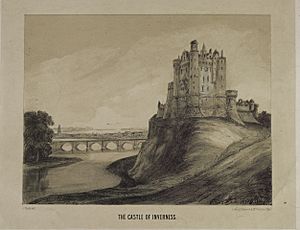 In 1548 another castle with tower was completed by George Gordon, 4th Earl of Huntly (1514–1562). He was constable of the castle until 1562. The castle was later taken by the Clan Munro and Clan Fraser, who supported Mary Queen of Scots during the Siege of Inverness (1562). Robert Mor Munro, 15th Baron of Foulis, chief of the Clan Munro, was a staunch supporter and faithful friend of Mary Queen of Scots and was consequently treated favourably by her son James VI.

George Buchanan states that when the unfortunate queen went to Inverness in 1562 and found the gates of the castle shut against her, "as soon as they heard of their sovereign's danger, a great number of the most eminent Scots poured in around her, especially the Frasers and Munros, who were esteemed the most valiant of the clans inhabiting those countries in the north". These two clans took Inverness Castle for the Queen, which had refused her admission. The Queen later hanged the governor, a Gordon who had refused entry.

which translates in English as:

While Mary, Queen of Scots was in Inverness she bought gunpowder and 15 tartan plaids for her lackeys and members of her household.

Other sieges of Inverness Castle

Mary, Queen of Scots and Lord Darnley appointed Hucheon Rose of Kilravock keeper of the castle in September 1565. In October it was decided the Earl of Huntly should be keeper.

In May 1621 King James wrote from Theobalds to the Earl of Mar and Gideon Murray with orders that Inverness Castle should be repaired as soon as works at Linlithgow Palace and Dumbarton Castle were completed. Although, "a great part thereof was quite fallen down", the castle was not repaired at this time.

An illustration of the castle has featured on the reverse side of £50 note issued by the Royal Bank of Scotland, which was introduced in 2005.

The current Inverness Castle was built in 1836 on the site of the original. To improve the more recent castle, a gas, light, and water system was installed.

All content from Kiddle encyclopedia articles (including the article images and facts) can be freely used under Attribution-ShareAlike license, unless stated otherwise. Cite this article:
Inverness Castle Facts for Kids. Kiddle Encyclopedia.