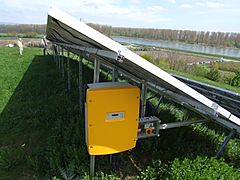 An inverter for a solar-mounted free-standing plant in Speyer, down the Rhine.

Direct current is created by devices such as batteries and solar panels. When connected, an inverter allows these devices to provide electric power for small household devices. The inverter does this through a complex process of electrical adjustment. From this process, AC electric power is produced. This form of electricity can be used to power an electric light, a microwave oven, or some other electric machine.

An inverter usually also increases the voltage. In order to increase the voltage, the current must be decreased, so an inverter will use a lot of current on the DC side when only a small amount is being used on the AC side.

Inverters are made in many different sizes. They can be as small as 150 watts, or as large as 1 megawatt (1 million watts).

All content from Kiddle encyclopedia articles (including the article images and facts) can be freely used under Attribution-ShareAlike license, unless stated otherwise. Cite this article:
Inverter Facts for Kids. Kiddle Encyclopedia.