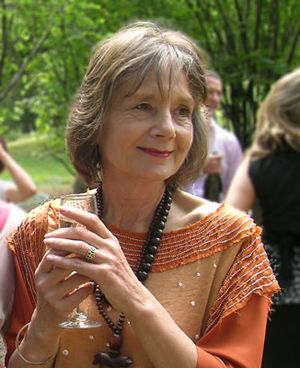 Irena Sibley at her property in Flowerdale, Victoria, October 2006

Her mother Anele and father Zenonas Pauliukonis fled communist-occupied Lithuania in 1946 when Irena was a baby. The Pauliukonis family immigrated to Australia via refugee camps in Freiburg, Germany, where her brother Vidas was born, and Naples, Italy. The family arrived in Sydney, Australia on 31 December 1949 and settled in Bathurst, before establishing their family home in Cabramatta in Sydney's western suburbs.

Irena Pauliukonis married artist Andrew Sibley in 1967 and had two sons, Benedict and Jonathan. The Sibley family lived in Albert Park, where she was involved in the Save Albert Park protest movement against the Australian Grand Prix in the 1990s.

The Sibley family established a property and artists' studio in Flowerdale, Victoria in the 1970s and 1980s, with spectacular terraced gardens which have been featured in House & Garden magazine. The property was successfully defended by the family from the Black Saturday (2009) bushfires, with only minor damage sustained, due largely to a sprinkler system and the strategic planting of fire retardant vegetation.

Irena Sibley graduated in Fine Arts in 1964 from the National Art School in Sydney. In 1967, she established the art department at Burke Hall (a preparatory junior school of Xavier College) in Melbourne, and taught there on and off for 13 years. She was an art teacher at Firbank Girls' Grammar School from 1982 to 2007.

Her first book, Rainbow, was published in 1980, as both a children's book and hand-made Artist's Book, and her children's books have included the best-selling The Bilbies' First Easter, When the Sun Took the Colours Away (1991), and Zara's Zoo, (2001). Sibley's art works are held in the collections of the State Library of Victoria and the National Library of Australia, as well as many private collections.

Sibley has published over a dozen children's books, six handmade limited-edition books, and many bookplates for private collectors. Her artwork employs a range of techniques, including hand-coloured linocuts, scratchboard, and, later in her career, acrylic painting. Stylistically, her work can reflect Eastern European printmaking traditions, as well as contemporary representations of Australia's natural environment.

Irena Sibley was a passionate environmentalist, with a love for Australia's native flora and fauna. This love is reflected in many of her works, particularly An Alphabet of Australian Wildflowers (1988) and her Easter Bilby series. Irena Sibley believed that rabbits pose a serious threat to Australia's natural environment (see Environmental issues in Australia) and supported moves to replace the Easter Bunny with the "Easter Bilby" in Australian Easter celebrations.

Irena Sibley's limited-edition books and original artworks are held in many private collections in Australia, Europe, Japan, and the U.S., and in public collections including:

In 2008, Sibley claimed the Keith Wingrove Award, a national accolade that recognises excellence in book plate art and design. Sibley received the book plate award for her work for artist Charles Blackman.

All content from Kiddle encyclopedia articles (including the article images and facts) can be freely used under Attribution-ShareAlike license, unless stated otherwise. Cite this article:
Irena Sibley Facts for Kids. Kiddle Encyclopedia.