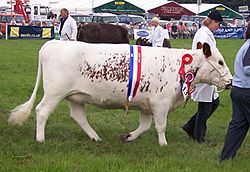 The Irish Moiled is a rare cattle breed from Ireland. It is a dual-purpose breed, reared for both beef and milk. It originated in County Leitrim, County Sligo, County Down and County Donegal, but the breed is now found throughout Ireland.

The Irish Moiled Cow is one of the oldest breeds of cow in Ireland.

The Irish Moiled Cow is one of the most distinctive breeds in Ireland. They are polled cows (they do not grow horns) and are generally red with a white line on the back and stomach. They are usually known to have a flecked face and are dual producers being used for both beef and dairy products, which is uncommon with most breeds. These cows are slightly smaller than average, weighing around 550 kg. The breed originated in County Leitrim, County Sligo, and County Donegal, but is now found throughout Ireland. The name “Irish Moiled Cow” takes its origins from the Irish word Maol meaning bald and references the fact that these cows do not have horns. Until recently the breed was in decline, falling to just two dairy herds in the 1970s with a population that included just 20 breeding females. However with the introduction of bloodlines from Jersey, Ayrshire, Shorthorn and Friesian breeds the numbers have improved and are now being produced throughout Ireland, as well as in parts of Britain.

Irish Moiled meat is remarked to be of great quality and has a recognisable flavor. This cow is known to produce good beef in poor conditions but needs care to protect it from becoming overweight. It was the quality of Irish Moiled beef that had saved the breed from extinction.

The Irish Moiled cow has a gestation period of about nine months if kept at a decent health.

All content from Kiddle encyclopedia articles (including the article images and facts) can be freely used under Attribution-ShareAlike license, unless stated otherwise. Cite this article:
Irish Moiled Facts for Kids. Kiddle Encyclopedia.