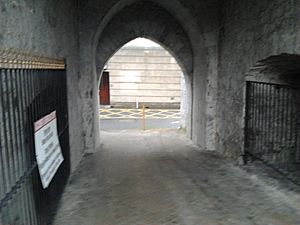 Irishtown (Irish: An Baile Gaelach) is an area of central Limerick, Ireland. The area along with Englishtown and Newtown Pery forms Limerick City Centre. Broad Street, John Street and Mungret Street are the main streets in the district. St. John's Square, a prized early Georgian development is located here as is St. John's Cathedral and the Milk Market which is located off Mungret Street.

Irishtown is one of the oldest districts in Limerick dating from the Middle Ages. The district evolved on the southern banks of the Abbey River as the City of Limerick, located on the southern part of King's Island as an island city from the time of its foundation, grew beyond its boundaries. The Irishtown area was populated mainly by native Irish in contrast to the Norman or Old English settlement on King's Island. The 2 areas of Limerick had their distinct characteristics and customs and were connected by one bridge; Baal's Bridge over the Abbey River.

Today, very little of the historical urban fabric remains in Irishtown despite being one of the oldest areas of Limerick and located close to the present day city centre. Following the construction of Newtown Pery the houses were converted into tenements and rented to the city's poorest residents. The houses were very poorly maintained and for a time the peoples lived in slum conditions particularly in the laneways off the main streets. The slums were cleared in the mid 20th Century and the Irishtown area literally crumbled with (in some cases) only the outline of the streets remaining such was the dereliction of the area at the time. The area was rebuilt in the early 1990s.

All content from Kiddle encyclopedia articles (including the article images and facts) can be freely used under Attribution-ShareAlike license, unless stated otherwise. Cite this article:
Irishtown, Limerick Facts for Kids. Kiddle Encyclopedia.