Iron Rattler was designed by Alan Schilke and built by Rocky Mountain Construction (RMC). The wooden Rattler had been constructed by Roller Coaster Corporation of America. At the time of its opening, the Rattler was the tallest and fastest wooden coaster in the world, with a height of 179 feet (55 m), a first drop of 166 feet (51 m) and a top speed of 73 mph (117 km/h). RMC modified the wooden Rattler by placing new steel track on top of the existing wooden support structure. The distance between the lowest and highest points of the first drop was increased from 124 to 171 feet (38 to 52 m) and the drop was made steeper by changing the angle to 81 degrees. The resulting modifications increased the speed of the trains from 65 to 70 miles per hour (105 to 113 km/h).

Six Flags Fiesta Texas announced in August 2012 that they would be revamping their wooden coaster, The Rattler, into a steel-tracked coaster called Iron Rattler. The renovation would be performed by Rocky Mountain Construction and would feature the I-Box steel track on some of the original wooden coaster supports, Rattler-themed trains supplied by Gerstlauer, and a barrel roll. The new ride would open for the 2013 season.

The Rattler had been constructed by Roller Coaster Corporation of America. When the coaster debuted on March 14, 1992, it was the tallest and fastest wooden coaster in the world, with a height of 179 feet (55 m), a first drop of 166 feet (51 m) and a top speed of 73 mph (117 km/h), outdoing its then rival, Mean Streak at Ohio's Cedar Point. Designer John Pierce stated that the original plans kept changing as park co-developers Gaylord Entertainment Company insisted on having the tallest wooden coaster in the world. It held this title until 1994, when its first drop was shortened from 166 to 124 feet (51 to 38 m), resulting in a reduction of its top speed from 73 to 65 miles per hour (117 to 105 km/h). 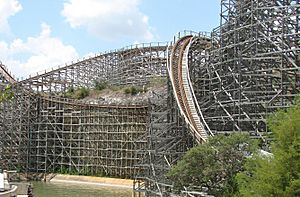 In late 2009, Six Flags Over Texas closed their Texas Giant wooden roller coaster for a $10 million renovation which took more than a year to complete. Idaho-firm Rocky Mountain Construction replaced the wooden track with a new steel I-Box track, retaining a wooden support structure. The refurbishment was ultimately a success with "resoundingly positive reviews from riders". The park's parent company, Six Flags, immediately began looking for other rides in its chain which would benefit from a similar overhaul.

At the IAAPA 2011 Trade Show, Alan Schilke of Rocky Mountain Construction revealed their company had two projects that they would be working on for 2013 openings – one of which was an I-Box conversion of a wooden roller coaster. It was later revealed by the Spokane Journal of Business that The Rattler would be completely refurbished in 2013 with new track and trains in a manner similar to that used by the company on the New Texas Giant at Six Flags Over Texas in 2011. Although Six Flags had not publicly confirmed their plans, the park announced that The Rattler would close on August 5, 2012. At the end of the operating day on August 5, 2012, park personnel and select enthusiasts took the final ride, after which, The Rattler, as a wood coaster, ceased operation.

The National Roller Coaster Museum and Archives announced on April 16, 2013, they would be auctioning off the first ride of Iron Rattler on the evening of May 17, 2013, and proceeds going towards the museum. Also a soft-opening was held to the media on May 15, 2013. The grand opening of the Iron Rattler was May 25, 2013. 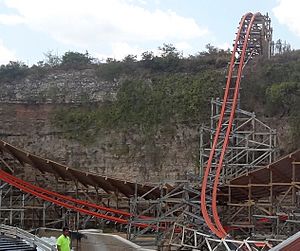 Iron Rattler is located in the Western-themed Crackaxle Canyon area of Fiesta Texas, sitting next to the Road Runner Express and The Gully Washer. It is Rocky Mountain Construction's second installation of I-Box track, and the first to feature a barrel roll inversion. Iron Rattler operates with two Rattler-themed trains manufactured by Gerstlauer. Each train is made up of six cars which seat riders in two rows of two. Riders are restrained through the use of a lap bar and a seat belt.

The table below compares the original Rattler, with the updated Iron Rattler ride. The original ride by the Roller Coaster Corporation of America was approximately 1,800 feet (550 m) longer due to a 900° helix atop the quarry walls. The refurbished ride by Rocky Mountain Construction features a steeper and longer first drop, thus achieving a faster speed.

All content from Kiddle encyclopedia articles (including the article images and facts) can be freely used under Attribution-ShareAlike license, unless stated otherwise. Cite this article:
Iron Rattler Facts for Kids. Kiddle Encyclopedia.