Originally constructed by Dinn Corporation, Mean Streak opened to the public on May 11, 1991, as the tallest wooden coaster in the world with the longest drop height. After more than 25 years of operation, Cedar Point closed Mean Streak on September 16, 2016, casting doubt and uncertainty regarding the ride's future. Over time, the park dropped subtle hints about a possible track conversion, which was officially confirmed in August 2017. It was marketed as the world's first hybrid hypercoaster – a wooden and steel roller coaster at least 200 feet (61 m) in height – and reemerged as Steel Vengeance. A minor collision on opening day led to a temporary closure and later modifications from RMC.

Cedar Point revealed in 1990 that a new roller coaster would be built for the 1991 season. It was officially named Mean Streak on October 24, 1990. Construction commenced later that year and continued through spring of the following year. Mean Streak opened with the park's seasonal debut on May 11, 1991, in the Frontiertown section of the park behind one of Cedar Point & Lake Erie Railroad's stations. The ride's media day press conference was held on May 22, 1991.

Mean Streak was one of eleven roller coasters designed and manufactured by Ohio-based Dinn Corporation before the company went out of business in 1992. It was a twister coaster model designed by Curtis D. Summers, and the ride cost $7.5 million to construct. In September 2010, a small 5-foot (1.5 m) section caught fire, which was quickly contained by firefighters to a small portion of the ride.

On August 1, 2016, Cedar Point announced that Mean Streak would offer its last rides to the public on September 16, 2016. Park officials, however, declined to confirm that the ride was being torn down. Following its closure, unconfirmed rumors emerged that the roller coaster was being refurbished by Rocky Mountain Construction (RMC), a manufacturing company well known for its restoration work on existing wooden roller coasters. The company has refurbished, and in many cases completely transformed, other wooden roller coasters with applications of either of its two patented technologies: I-Box and Topper track.

Cedar Point began teasing the public on the ride's future with the release of an 18-second teaser video entitled "They're Coming" on April 1, 2017. Cedar Point showed video shots briefly panning several elements of the rumored conversion. Another similar video showing snippets of the new ride was released a few months later in June. Three more videos were released over the summer of 2017, with catchphrases “They‘re rollin’ in like thunder," "There's a score to settle," and "They stake their claim." On August 16, 2017, Cedar Point held an official announcement for Steel Vengeance. It was also announced that a virtual recreation of the ride would be made available in the PC video game, Planet Coaster. Steel Vengeance opened to the public on May 5, 2018.

Following an incident on Twisted Timbers at a sister park, where a phone hit a rider in the face during the ride, Cedar Point issued a temporary ban on cell phones when entering the ride's queue beginning in August 2018. The ban was lifted the following season after zipper pouches were installed on the trains to safely secure loose items. Metal detectors were installed in the queue, ensuring that all loose articles were placed in these pouches. The pouches were removed in 2020 following the COVID-19 pandemic, and the previous ban was reinstated. 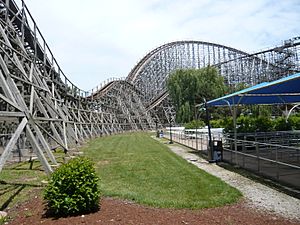 Mean Streak's wooden track was approximately 5,427 feet (1,654 m) in length and the height of the lift hill was approximately 161 feet (49 m). It was constructed from 1.7 million board feet (4,000 m³) of treated southern yellow pine. In 1994, a trim brake was installed on the first drop reducing its overall speed in an attempt to prevent abnormal track wear and increase ride comfort. Over the years, Mean Streak had been re-tracked several times. Some re-tracking was completed by Martin & Vleminckx. Prior to the 2012 operating season, many sections of track after the first drop were replaced. This was the most significant work done on the ride since it opened. Also, in 2012, a portion of the queue was removed to make room for a new building. The building is located in the infield of Mean Streak and is used for the HalloWeekends haunted house, Eden Musee. It is also used for storage during the off-season and summer.

Mean Streak operated with three trains manufactured by Philadelphia Toboggan Coasters (PTC) that were colored red, gold, and green. Each train had seven cars with riders arranged two across in two rows for a total of 28 riders per train. The minimum height required to ride was 48 inches (120 cm), and guests were secured by an individual ratcheting lap bar and seat belt. During the 2011–2012 off-season, all three trains were sent to PTC's headquarters for maintenance and refurbishment.

After the conversion to Steel Vengeance, the coaster's track length was extended to 5,740 feet (1,750 m) and the ride's peak height was increased to 205 feet (62 m). Its three new trains are each based on a character from the themed backstory of the ride: Jackson "Blackjack" Chamberlain, Chess "Wild One" Watkins, and Wyatt "Digger" Dempsey." 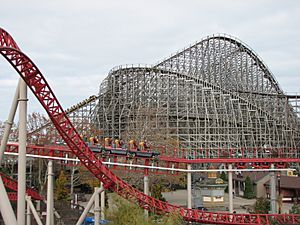 Mean Streak with Maverick in the foreground

After leaving the station, the Mean Streak train passed through the storage tracks and made a 180-degree turn to the right, before ascending the 161-foot-tall (49 m) lift hill. After cresting the top of the hill, the train dropped 155 feet (47 m) at a 52-degree-angle, reaching a top speed of 65 miles per hour (105 km/h). While dropping, riders went through a set of trim brakes on the first drop. Riders then went through a 123-foot-tall (37 m) twisted turnaround followed by a small airtime hill, and then another twisted turnaround. The train maneuvered over the lift hill and dipped down to the right. After that, the train traveled through the ride's structure and down another hill, turning to the left into the mid-course brake run. The train then dipped down to the left into another airtime hill. Riders then went through several small airtime hills and turned through the ride's structure followed by the final brake run. One cycle of the ride lasted 3 minutes and 13 seconds, making it the former longest duration of any roller coaster at Cedar Point.

All content from Kiddle encyclopedia articles (including the article images and facts) can be freely used under Attribution-ShareAlike license, unless stated otherwise. Cite this article:
Steel Vengeance Facts for Kids. Kiddle Encyclopedia.