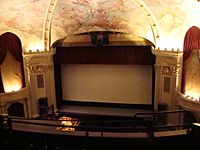 Interior of the auditorium

Constructed in 1928, one of three movie houses in Ironwood at the time, the theatre presented first run films and vaudeville shows. The first feature film shown was "Wings" (1927) starring Clara Bow, Charles Rogers, Richard Arlen and Gary Cooper. Notably, the same film was shown at the unveiling of the rededicated Barton Organ with Dr. Steven Ball performing on September 18, 2010.

The theatre continued as a movie and vaudeville house under the direction of A.L. Pikar through the Golden Age of Hollywood of the 1930s, '40s, and '50s—the theatre flourished during these decades. Experiencing extreme financial difficulties in the late 70s, the theatre closed its doors in the spring of 1982.

The theatre was designed by self-taught Ironwood architect Albert Nelson and was constructed in 1928 at a cost of $160,000 (equivalent of approximately $2 million today). The architecture was modeled after the Italian Renaissance style featuring hand-sculpted faux pillars and arched proscenium style stage. The building seated 1,000 when it opened with 600 seats on the main floor and 400 seats on the balcony level.

Due to many restoration efforts and improvements of the theatre's design, many seats were removed to accommodate for added luxuries including a handicapped accessible area, light & sound booth, and concession stand. The theatre now seats 732—480 seats on the main floor and 252 seats in the balcony. The chairs found in the theatre today are exact replica replacements of the seats originally installed. 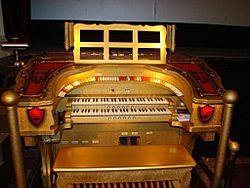 The Barton organ, happily nicknamed "The Grand Old Lady", remains in place on its pedestal where it was installed in 1928. The historic theatre organ is a 2-manual, 7-rank, 499-pipe organ that is still completely playable. Restoration efforts on the organ began in 2000 under the direction of Dr. Tom Peacock. Volunteers were taught by experts on inspection and repair of the console, pipes, valves, and wiring. Virtually all organ components were inspected and cleaned with replacements of all leather materials, which were in dire need of replacement. Much of the wire running from the switchboard to the console was replaced as required by electrical code—this included over 700 solder connections on the back of the console.

After countless hours of volunteer work and thousands of dollars from grants and donations, the Barton Organ console returned from the Smith Pipe Organ Restoration company in June 2010, completing the restoration of the infamous organ console. The instrument is now completely playable. It was announced on Saturday, September 18, 2010, that the American Theatre Organ Society would like to open a chapter in Ironwood, Michigan. Plans to establish an Upper Peninsula chapter involve theatres across northern Michigan.

On Thursday, November 17, 2011, “The Historic Ironwood Theatre Presents H.I.T. Idol” showcased 41 finalists who sang solos in a style similar to American Idol, and six winners were selected to perform the following night as opening acts for 2008 American Idol finalist Matt Giraud. All of the finalists had an opportunity to sing backup vocals for two of Giraud's songs. In addition to the show focusing on the musical talent of local youth, H.I.T. Idol was a Historic Ironwood Theatre production with volunteers overseeing all aspects of the show.

The proscenium mural of the theatre displays a stunning 3-piece canvas painting by artist William Hasenberg. The mural was painted during the finishing stages of construction in 1927 to complete the theatre's grand scale look. During a renovation in 1973, the mural and surrounding ceiling was painted with dark blue and white paint. The repainting was thought to have destroyed the mural until restoration efforts by muralist David Strickland proved successful in removing the blue and white paint without destroying the underlying mural. The 1994 restoration project restored the mural to its original look. The mural, now perfectly restored, catches the eye of every guest who steps into the auditorium.

All content from Kiddle encyclopedia articles (including the article images and facts) can be freely used under Attribution-ShareAlike license, unless stated otherwise. Cite this article:
Ironwood Theatre Facts for Kids. Kiddle Encyclopedia.