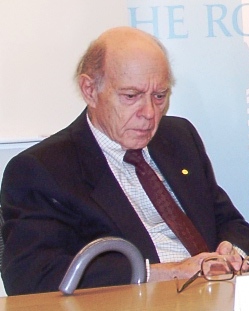 Irwin A. Rose (July 16, 1926 – June 2, 2015) was an American biologist. He was awarded the 2004 Nobel Prize in Chemistry, along with Aaron Ciechanover and Avram Hershko, for the discovery of ubiquitin-mediated protein degradation.

Rose was born in Brooklyn, New York to a Jewish family. He was married to Zelda Budenstein and had four children.

All content from Kiddle encyclopedia articles (including the article images and facts) can be freely used under Attribution-ShareAlike license, unless stated otherwise. Cite this article:
Irwin Rose Facts for Kids. Kiddle Encyclopedia.