Isabelle Collin Dufresne (stage name Ultra Violet; 6 September 1935 – 14 June 2014) was a French-American artist, author, and both a colleague of Andy Warhol and one of the pop artist's so-called superstars. Earlier in her career, she worked for and studied with surrealist artist Salvador Dalí. Dufresne lived and worked in New York City, and also had a studio in Nice, France.

Isabelle Collin Dufresne was brought up in a strict religious upper-middle-class family, but she rebelled at an early age. She was instructed at a Catholic school, and then a reform school. In 1953, she received a BA in Art at Le Sacré Cœur in Grenoble, France. She soon left France to live with an older sister in New York City.

In 1954, after a meeting with Salvador Dalí, she became his "muse”, pupil, studio assistant, and lover in both Port Lligat, Spain, and in New York City. Later, she would recall, "I realized that I was 'surreal', which I never knew until I met Dalí". In the 1960s, Dufresne began to follow the progressive American Pop Art scene including Jasper Johns, Robert Rauschenberg and James Rosenquist.

Warhol and "The Factory" 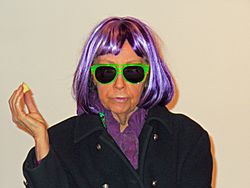 Ultra Violet at a celebration of the Warhol Factory, 2007

In 1963, Dalí introduced Dufresne to Andy Warhol, and soon she moved into the orbit of his unorthodox studio, "The Factory". In 1964 she selected the stage name "Ultra Violet" at Warhol's suggestion, because it was her preferred fashion — her hair color at the time was often violet or lilac. She became one of many "superstars" in Warhol's Factory, and played multiple roles in over a dozen films between 1965 and 1974.

In 1967 Ultra Violet played a part (with, among others, Taylor Mead) in the surrealistic play Desire Caught by the Tail by Pablo Picasso when it was set for the first time in France at a festival in Saint-Tropez. 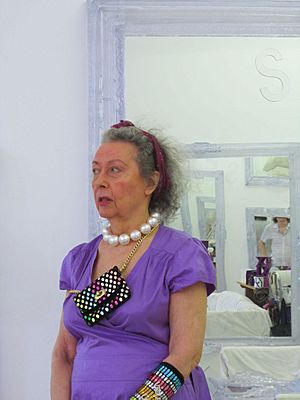 In 1969, she was "dethroned" as Warhol's primary muse by Viva, a more recent discovery.

Although a full participant in activities at the Factory, she generally avoided the heavy drug usage prevalent at the time, saying that her body reacted badly to drugs. She had tried smoking as a rebellious teen, had gotten very sick as a result, and resolved to abstain from drug usage. She would later observe, "If I had lived like all those young people, I would be dead today".

In the 1980s, she gradually drifted away from the Factory scene, taking a lower profile and working independently on her own art. In her autobiography, published the year after Warhol's unexpected demise in 1987, she chronicled the activities of many Warhol superstars, including several untimely deaths during and after the Factory years.

In 1973, a near-death experience launched Ultra Violet on a spiritual quest, culminating in her baptism in 1981. For the rest of her life, she was a practicing member of The Church of Jesus Christ of Latter-day Saints.

Dufresne died on 14 June 2014 in New York City at the age of 78, from cancer. She had never married. Dufresne was survived by two sisters. She is buried in Saint-Égrève near Grenoble.

All content from Kiddle encyclopedia articles (including the article images and facts) can be freely used under Attribution-ShareAlike license, unless stated otherwise. Cite this article:
Isabelle Collin Dufresne Facts for Kids. Kiddle Encyclopedia.