Isha was born on 29 September 1984 in Gujarat, India as the eldest daughter of acclaimed danseuse Daksha Sheth and Australian musician father Dev Issaro. She lived in Ahmedabad, from where she moved to Delhi, Vrindavan and Bangalore, before settling down in Trivandrum. She has an younger brother named Tao Issaro, who is a noted percussionist.

Isha's parents founded an arts school called Academy for Art Research, Training and Innovation (AARTI) in Trivandrum, Kerala, where she lived for 13 or 14 years. At the age of thirteen, she began formal learning in dance from her mother Daksha Sheth at her dance school and learned Kalaripayattu, Kathak and Chhau dance as well as giving performances in 22 countries over last seven years.

According to an interview with India Daily, Isha stated she "lived a different life poles apart from the film industry. For 11 years I have been training eight to 10 hours a day in a very disciplined atmosphere where there is no distinction between boys and girls. I was not supposed to cry over a clipped nail. Beyond stage even my wardrobe has mostly unisexual dresses, jeans and T-shirts". She is a trained Malkam dancer, a type of folk dance. 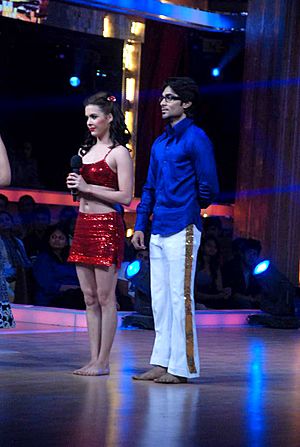 Sharwani on the sets of Jhalak Dikhhla Jaa 5

Isha never gave acting in films much priority, until she was spotted by filmmaker Subhash Ghai, who required someone with dancing skills to perform in his movie Kisna (2005). He offered her a main role in the film opposite Vivek Oberoi. The film did not do well. She was also the dancer opposite Hritik Roshan in the Parle Hide & Seek commercial, performing a much appreciated dance duet with Hrithik Roshan.

Since then she has continued her dance performances on stage, as well as signing for several movies which were released in 2006 and 2007. She appeared as a female lead in the Hindi comedy Darwaza Bandh Rakho in 2006.

She is currently the lead dancer in the Daksha Sheth Dance Company, and has performed in front of live audiences throughout the world, including Mumbai, London, Perth and Muscat.

In 2012, Isha was a participant in the dance reality show, Jhalak Dikhhla Jaa Season 5, which was aired on Colors TV and earned acclaim for her dance performances in the show.

In 2013, she played the titular role as a housebreaker in the Malayalam short film Esha, a part of the anthology 5 Sundarikal.

In 2014, Sharvani played the lead role in the Malayalam film Iyobinte Pustakam, as an Anglo-Indian illegitimate child of a British landlord and an ethnic tribal Indian mother.

All content from Kiddle encyclopedia articles (including the article images and facts) can be freely used under Attribution-ShareAlike license, unless stated otherwise. Cite this article:
Isha Sharvani Facts for Kids. Kiddle Encyclopedia.