Ivan Dmitrievich Vasilenko was born January 20, 1895 in the village of Makiivka, in Don Host Oblast (in present-day Donetsk Oblast, Ukraine) in a clerk’s family. Seven years later, his family moved to the city of Taganrog proper. In 1912 Ivan Vasilenko graduated from the 4-year college and became teacher at a village school. He entered the Belgorod pedagogical institute, but was soon dismissed for organization of a Marxist group, because of that the further route for Vasilenko to teaching was closed and he worked as an accountant in the Taganrog Land bank. After October Revolution, he managed trade department, later the department of public education, and gave lessons. During World War II, he contributed to Soviet military newspapers.

The literary career of Ivan Vasilenko

The literary talent of Vasilenko was discovered by Russian writer Vikenty Veresaev in 1937. All of his tales and stories written for 30 years of creative life, such as Magic Box, Childhood of the Actor, The Little Mouse, The Gordian Knot, Cocks, Green Trunk, Golden Shoes, Sunrise is only Once a Day, Merimes Watch, Family Council, Misha and Masha and others, were reissued by local, republican and central publishing houses and used large popularity both for children and for adults. 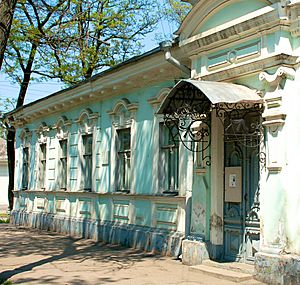 In 1949, Vasilenko was awarded a State Stalin Prize for the story "The Little Star" about life of trade school’s students. Many books have been translated into 27 languages of USSR nations, and into Czech, German, Polish, Bulgarian, Romanian, Vietnamese, French and English languages. His works The Little Star, Artyomka in the Circus, Magic Box, Golden Shoes were filmed and released as motion pictures.

"Artyomka" – a monument to Vasilenko's most popular character in Taganrog.

All content from Kiddle encyclopedia articles (including the article images and facts) can be freely used under Attribution-ShareAlike license, unless stated otherwise. Cite this article:
Ivan Vasilenko Facts for Kids. Kiddle Encyclopedia.