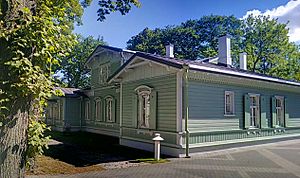 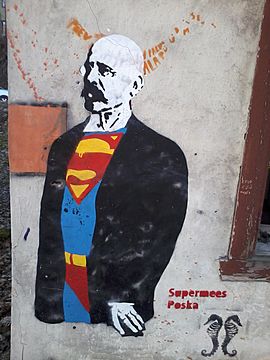 "Superman Poska" - the graffiti of Jaan Poska in Tartu

In 1890, Poska graduated from the faculty of Law of the University of Tartu, after that he worked as barrister in Tallinn. Jaan Poska was mayor of Tallinn during 1913–1917. In that position he supported reforms, like reforming healthcare and founding two schools. In April 1917, he became governor of the Autonomous Governorate of Estonia. 28 November [O.S. 15 November] 1917 the Maapäev refused to recognize the new Bolshevik rule and proclaimed itself the supreme legal authority of Estonia. The Republic of Estonia formally declared independence on 24 February 1918, only to be occupied by the German Empire until the end of World War I. Estonian war of independence against Baltic German and Russian forces lasted from 1918 to 1920.

On 24 February 1918, Poska was appointed the Minister of Foreign Affairs of Estonia. He worked in Western Europe for gaining diplomatic recognition to Estonia and participated in Paris Peace Conference. He led the peace talks with Soviet Russia and achieved Treaty of Tartu which was signed on 2 February 1920.

All content from Kiddle encyclopedia articles (including the article images and facts) can be freely used under Attribution-ShareAlike license, unless stated otherwise. Cite this article:
Jaan Poska Facts for Kids. Kiddle Encyclopedia.