Jackie Noëlle Groenen RON (born 17 December 1994) is a Dutch footballer and former judoka who plays as a midfielder for FA WSL club Manchester United and the Netherlands women's national football team. She previously played for German clubs SGS Essen, FCR 2001 Duisburg and FFC Frankfurt, as well as for Chelsea in the English FA WSL.

Groenen was born in the Netherlands but grew up just over the Belgian border in Poppel. In 2014, FIFA ruled her ineligible to switch allegiances to Belgium, as she did not hold a Belgian passport when she played for the Netherlands at youth level.

Groenen and her sister, Merel, began playing football at Goirlese Sportvereniging Blauw-Wit. After VV Riel and Wilhelmina Boys, they moved to SV Rood-Wit Veldhoven. The sisters continued their football career in the Frauen-Bundesliga and became players for SGS Essen. Groenen made her debut for SGS Essen in the DFB-Pokal Cup on 30 January 2011 against Turbine Potsdam. 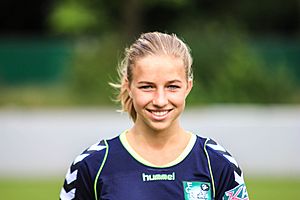 Groenen during her time at FCR 2001 Duisburg.

In February 2014, Groenen signed for Chelsea. On 17 April, she made her FA WSL debut in a 2–0 win over Bristol City. On 13 July, Groenen scored her first goals, netting twice in a 13–0 victory against London Bees in the FA WSL Continental Cup. 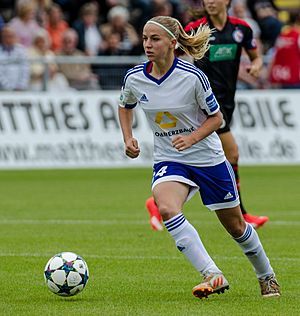 Groenen playing for FFC Frankfurt in 2015.

She returned to Germany and signed for FFC Frankfurt in June 2015. On 5 September, Groenen made her debut for the club in a 1–0 win against 1899 Hoffenheim.

On 22 May 2019, it was announced Groenen had signed a contract with Manchester United ahead of the 2019–20 season. In doing so, she became the team's first overseas signing with the team having formed a year earlier consisting of all British players. Groenen made her debut for Manchester United against Manchester City in the FA WSL on 7 September 2019, a 1–0 loss in the inaugural Manchester derby.

FIFA blocked Groenen's attempts to switch to representing Belgium because she did not have a Belgian passport when she played for the Netherlands' youth teams. She later indicated her willingness to play for the Netherlands again.

In January 2016, Groenen was called up to the Netherlands senior squad for the team's winter training camp in Turkey. She appeared in two friendly matches against Denmark to collect her first senior caps on 22 January 2016.

Groenen was part of the Dutch team that won the UEFA Women's Euro 2017. She played in all matches and was named in the 2017 UEFA Team of the Tournament.

In February 2018, Groenen was selected for the Netherlands side that won the 2018 Algarve Cup. Due to the final between Netherlands and Sweden being cancelled, caused by heavy rain and adverse weather conditions, the Algarve Cup was awarded to both teams.

In April 2019, Groenen was selected for her first World Cup. She started every game at the tournament and scored the only goal in extra-time of the 1–0 semi-final victory over Sweden to help the team reach their first World Cup final. The Netherlands eventually lost the final to the United States.

Groenen's judo career came to an end when she was 17. Her employers FCR 2001 Duisburg made clear their unhappiness when she broke her hip in a judo accident the day before a football match. Groenen admitted that she preferred football and would eventually have chosen to stop judo in any case. 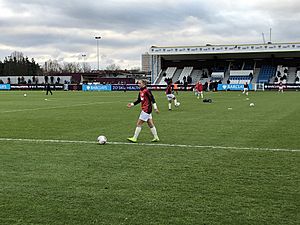 While playing for Chelsea in London, Groenen was studying for a law degree at Tilburg University and the club would fly her to the Netherlands for her exams. Her older sister Merel used to play for Belgian women's football team Lierse SK.

All content from Kiddle encyclopedia articles (including the article images and facts) can be freely used under Attribution-ShareAlike license, unless stated otherwise. Cite this article:
Jackie Groenen Facts for Kids. Kiddle Encyclopedia.