Jacopo Peri (Zazzerino) (20 August 1561 – 12 August 1633) was an Italian composer and singer of the transitional period between the Renaissance and Baroque styles, and is often called the inventor of opera. He wrote the first work to be called an opera today, Dafne (around 1597), and also the first opera to have survived to the present day, Euridice (1600). 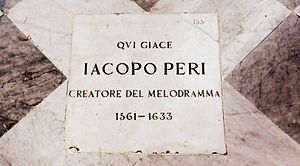 Peri was born in Rome, but studied in Florence. He had several church jobs, playing the organ and singing. He also worked at the court of the Medici family, playing instruments and composing incidental music for plays and madrigals.

In the 1590s, Peri worked for Jacopo Corsi, the most important patron of music in Florence. They felt that art at that time (music, drama, painting etc.) was not as good as the classical art that had been produced 2000 years ago in Ancient Greece and Ancient Rome. They wanted to write drama like the old Greek tragedies.

All content from Kiddle encyclopedia articles (including the article images and facts) can be freely used under Attribution-ShareAlike license, unless stated otherwise. Cite this article:
Jacopo Peri Facts for Kids. Kiddle Encyclopedia.