Brig. General Jalil Zandi (1951–2001) was a fighter pilot in the Islamic Republic of Iran Air Force who served for the full Iran–Iraq War. His record qualifies him as an ace and the most successful pilot of that conflict in air-to-air combat. It also made him the highest-scoring pilot in the history of the F-14 Tomcat.

Jalil Zandi began in the IIAF and stayed on to serve in the IRIAF when it was somewhat dangerous for pilots to continue their military service. 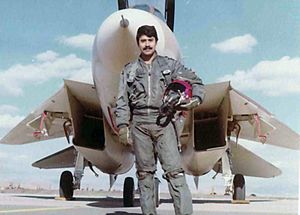 He earned his fame as an F-14 Tomcat pilot during the Iran–Iraq War. He has been reliably credited with shooting down 11 Iraqi aircraft (8 confirmed victories through examination with US intelligence documents released according to FOIA inquiry and 3 probable victories). The victories include four MiG-23s, two Su-22s, two MiG-21s, and three Mirage F1s. This makes him the most successful F-14 Tomcat pilot ever. 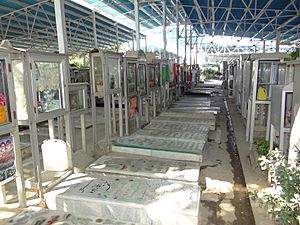 His last official post, before his death, was deputy for planning and organization of the Iranian Air Force

He died with his wife Zahra Moheb Shahedin in 2001 in a car accident near Tehran. He is buried in Behesht-e Zahra cemetery in the south of Tehran. He had three sons: Vahid, Amir, and Nader.

All content from Kiddle encyclopedia articles (including the article images and facts) can be freely used under Attribution-ShareAlike license, unless stated otherwise. Cite this article:
Jalil Zandi Facts for Kids. Kiddle Encyclopedia.