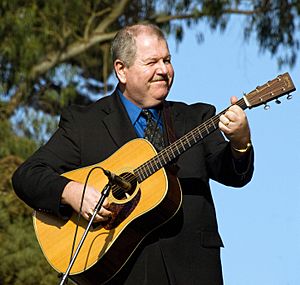 James Alan Shelton (November 3, 1960 – June 3, 2014) was an American Bluegrass guitarist. He was a solo musician and released 10 albums. However, he also performed with Ralph Stanley's Clinch Mountain Boys, with whom he won a Grammy Award with.

Shelton was born in Kingsport, Tennessee and raised near Gate City, Virginia.

All content from Kiddle encyclopedia articles (including the article images and facts) can be freely used under Attribution-ShareAlike license, unless stated otherwise. Cite this article:
James Alan Shelton Facts for Kids. Kiddle Encyclopedia.