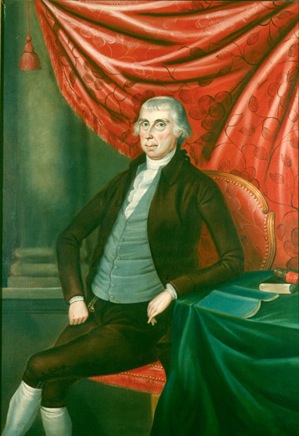 Col. James Madison Sr. (March 27, 1723 – February 27, 1801) was a prominent Virginia planter and politician. He was a colonel in the militia during the American Revolutionary War. He inherited Mount Pleasant, later known as Montpelier, a large tobacco plantation in Orange County, Virginia and, with the acquisition of more property, had 5,000 acres and became the largest landowner in the county. He was the father of James Madison, 4th President of the United States, who inherited what he called Montpelier, and Lieutenant General William Taylor Madison, and grandfather of Confederate Brigadier General James Edwin Slaughter.

Col. James Madison Sr. was the son of planter and politician Ambrose Madison and his wife Frances Taylor, and was born in 1723 in Orange County, Virginia. When he was nine, his family moved to their new plantation of Mount Pleasant in 1732. His father had hired slaves and an overseer to clear it, work that had been going on for five years to establish cultivation. That summer (1732) his father died at age 36 in August after a short illness.

The family or the sheriff believed he was poisoned by slaves, and three were charged in the case and convicted by justices of the Commission of Peace. Unusually, only one slave was executed; Dido and Turk, owned by the widow Frances Taylor Madison, were returned to her to serve as laborers after being punished by whipping.

James was tutored and trained to be a planter and slaveholder, and member of the landed gentry. His widowed mother never remarried, which was unusual at that time for a woman her age; she had extensive Taylor family in the county. As the eldest son, James Madison Sr. inherited Mount Pleasant when he came of age in 1744. He called the plantation Home House. Acquiring more land, he eventually owned 5,000 acres, making him the largest landowner in Orange County. By the time of his death, he owned 108 slaves.

During the American Revolution, Madison was chairman of the Orange County Committee of Safety. He was commissioned as a colonel in the Virginia militia.

All content from Kiddle encyclopedia articles (including the article images and facts) can be freely used under Attribution-ShareAlike license, unless stated otherwise. Cite this article:
James Madison Sr. Facts for Kids. Kiddle Encyclopedia.