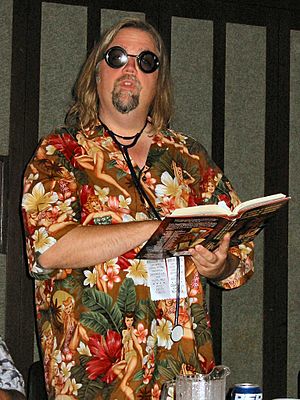 Lake was born in Taiwan to foreign service officer Joseph Edward Lake (born 1941). He was raised in both Taiwan and Nigeria before settling in the United States.

Lake died from a long battle with colorectal cancer on June 1, 2014 in Portland, Oregon. He was 49, and died just five day before his 50th birthday.

All content from Kiddle encyclopedia articles (including the article images and facts) can be freely used under Attribution-ShareAlike license, unless stated otherwise. Cite this article:
Jay Lake Facts for Kids. Kiddle Encyclopedia.