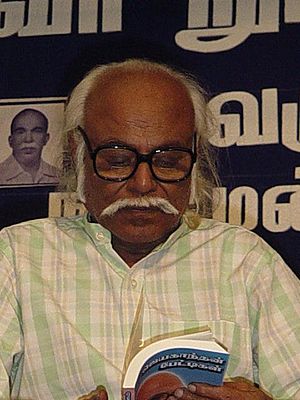 Jayakanthan (Tamil: ஜெயகாந்தன்; 24 April 1934 – 8 April 2015) was a Tamil writer, essayist, journalist, pamphleteer, filmmaker and critic. He was a recipient of both Jnanpith and Sahitya Akademi awards.

All content from Kiddle encyclopedia articles (including the article images and facts) can be freely used under Attribution-ShareAlike license, unless stated otherwise. Cite this article:
Jayakanthan Facts for Kids. Kiddle Encyclopedia.