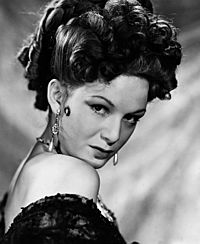 Jean Kent (Joan Mildred Summerfield; 29 June 1921 – 30 November 2013) was a British movie and television actress. She was also known as Jean Carr. She was born in Brixton, London. Kent was known for her role as Mille Harris in The Browning Version.

Kent died in Bury St. Edmunds, Suffolk on 30 November 2013, aged 92. She died following a fall a few days earlier at her home in Westhorpe, Suffolk.

All content from Kiddle encyclopedia articles (including the article images and facts) can be freely used under Attribution-ShareAlike license, unless stated otherwise. Cite this article:
Jean Kent Facts for Kids. Kiddle Encyclopedia.