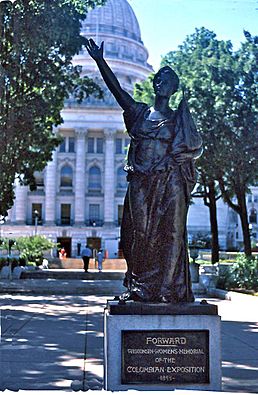 During the 1893 World's Columbian Exposition Miner and Helen Farnsworth Mears were named artists-in-residence at the Wisconsin Building. At that time Miner was commissioned to create a work of art representing the state. She created Forward; "Forward" is the motto of the state of Wisconsin. The statue was afterward purchased by women's suffrage organizations and "presented to the state of Wisconsin on behalf of the women's suffrage movement".

On June 23, 2020, Forward (the replica) was toppled by protesters following the arrest of a Black man. The fall of the statue was characterized as a strategic political move by protester Micah Le.

All content from Kiddle encyclopedia articles (including the article images and facts) can be freely used under Attribution-ShareAlike license, unless stated otherwise. Cite this article:
Jean Pond Miner Coburn Facts for Kids. Kiddle Encyclopedia.