Jeffrey Patrick Kinney (born February 19, 1971) is an American author and cartoonist, best known for the children's book series Diary of a Wimpy Kid. He also created the child-oriented website Poptropica.

Kinney was born and raised in Fort Washington, Maryland. Kinney attended Potomac Landing Elementary School and later Bishop McNamara High School, where he graduated from in 1989. He has an older brother and sister, and a younger brother. He attended the University of Maryland, College Park in the early 1990s. It was in college that Kinney created a popular comic strip, Igdoof, which ran in the school newspaper, The Diamondback.

In January 1998, Kinney brought up the idea of a middle-school weakling named Greg Heffley, who writes illustrated stories about his personal life. In May 2004, FunBrain and Jeff Kinney released an online version of the story, titled Diary of a Wimpy Kid. The website made daily entries until June 2005. He worked on his book for almost eight years, before showing it to a publisher in New York.

In February 2006, during the New York Comic Con, Jeff signed a multi-book deal with publisher Harry N. Abrams, Inc., to turn Diary of a Wimpy Kid into a print series.

The book became an instant hit, with the online version receiving about 20 million views as of 2007. When many online readers requested a printed version, Kinney agreed, and in April 2007, Diary of a Wimpy Kid was published. To date, eighteen Wimpy Kid books have been released, including 2 movie diaries and 2 Do-It-Yourself Books, and even a biography that Gregory's best friend wrote. In April 2009, TIME named Kinney one of The World's Most Influential People. In 2010, 2011, 2012, 2014, 2015, and 2016 the series won a Nickelodeon Kids Choice Award for Favorite Book. 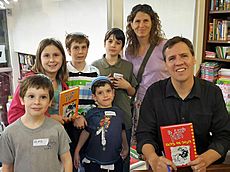 Kinney at a book signing event in Israel, 2016

Kinney works full-time as a writer/illustrator. He also created the kid-friendly website Poptropica which includes two islands called "Wimpy Wonderland" and "Wimpy Boardwalk", where the Diary of a Wimpy Kid characters and events are featured in the Poptropica universe.

Over 250 million copies of the Diary of a Wimpy Kid books have sold globally as of 2020 and the series was developed into feature films for which Kinney served as executive producer.

In May 2015, Kinney and his wife Julie opened "An Unlikely Story," a local bookstore and cafe in Plainville, Massachusetts. Kinney advocates that kids should spend time reading as an alternative to screen time.

On December 14, 2003, Jeff Kinney married Julie Kinney. They have two sons together, Will and Grant.

Kinney attended Bishop McNamara High School in Forestville, Maryland. Kinney graduated from the University of Maryland in 1993, originally majoring in computer science but switched to criminal justice in order to have more time to work on his comic, Igdoof.

He currently lives in Plainville, Massachusetts.

Diary of a Wimpy Kid

Diary of An Awesome Friendly Kid

The books were adapted into a film series in 2010.

A film based on the first book was released on March 19, 2010. It was produced by 20th Century Fox and directed by Thor Freudenthal. The film starred Zachary Gordon as Greg Heffley, Robert Capron as Rowley Jefferson, Rachael Harris as Susan Heffley, Steve Zahn as Frank Heffley, Devon Bostick as Rodrick Heffley, Connor and Owen Fielding as Manny Heffley, Chloë Grace Moretz as a new character named Angie Steadman, Grayson Russell as Fregley, Laine MacNeil as Patty Farrell, and Karan Brar as Chirag Gupta.

A second film, based on Diary of a Wimpy Kid: Rodrick Rules, was released on March 25, 2011. Zachary Gordon returned as Greg Heffley. Steve Zahn (Frank Heffley) and Rachael Harris (Susan Heffley) also returned. The film was directed by David Bowers and the screenplay was written by Gabe Sachs and Jeff Judah. Some new cast members who appeared in the film included Peyton List as Holly Hills among others. Kinney himself appeared in the film in a cameo role as, Holly's father. He would later reprise the role in the third film, Dog Days, which was released in 2012 and combines The Last Straw and Dog Days.

A fourth film, based on The Long Haul, was announced by Kinney via Twitter in April 2016. It was released on May 19, 2017, featuring an entirely new cast. Jeff Kinney also cameos in the film as the owner of a booth at a convention.

made many books of diary of a wimpy kid and still alive.

All content from Kiddle encyclopedia articles (including the article images and facts) can be freely used under Attribution-ShareAlike license, unless stated otherwise. Cite this article:
Jeff Kinney Facts for Kids. Kiddle Encyclopedia.