Diary of a Wimpy Kid (book) facts for kids

Diary of a Wimpy Kid first appeared on FunBrain in 2004, where it was read 20 million times. The abridged hardcover adaptation was released on April 1, 2007. The book was named a New York Times bestseller, among other awards and praise. The book was adapted into a feature film, which released in March, 2010.

Greg Heffley, the middle school protagonist, clarifies that "this is a JOURNAL, not a diary." He then explains that he only agreed to write in one for when he is "rich and famous," and "for now, I'm stuck in middle school with a bunch of morons." Greg then discusses the Cheese at his school. It started when someone left a piece of cheese on the blacktop, and it got moldy. If someone touches it, they have the "Cheese Touch," which they are stuck with until they pass it on by touching someone else. However, the last victim of the Cheese Touch moved away, and Greg hopes nobody starts it up again. He also talks about his best friend, Rowley. Although Greg wants to be famous and explains popularity to Rowley, "it just goes in one ear and out the other with him."

Greg then introduces his family. He has a teenage brother, Rodrick, who likes to pick on him, and a little brother, a toddler named Manny, who gets everything he wants and gets away with everything he does wrong. Greg's father does not encourage his way of life — playing video games all day — rather than going outside and playing sports.

Near Halloween, Greg writes that his father likes to hide in the bushes on Halloween day and drench teenagers with a trash can of water. Greg and Rowley decide to make their own haunted house, although they end up profiting only two dollars. On Halloween day, Greg and Rowley go trick-or-treating, but are challenged by a group of teenagers who spray them with a water-filled fire extinguisher. When they get home, they are mistakenly soaked by Greg's father.

Greg fails a geography test after a girl named Patty Farrel catches him cheating. At home, Greg's mother forces him into auditioning for the school play (based on The Wizard of Oz). Greg lands the role as a tree, while Patty Farrel is cast as Dorothy, the protagonist of the novel. During the show's performance, Greg becomes too nervous to sing, confusing the other trees. Patty gets frustrated, and Greg starts throwing props at Patty. The other trees join in, and while Greg's mother is disappointed, Greg ends up enjoying the play due to him getting back at Patty.

After getting a few presents for Christmas, Greg decides to play a game with Rowley in which Rowley must ride a bike while Greg tries to knock him off with a football. On one of Greg's tries, the ball gets under the front wheel, which causes Rowley to fall off and break his arm. When Rowley goes to school with a plaster cast, the girls take care of him (carrying his books, feeding him food), which makes Greg jealous.

Greg decides to join the Safety Patrols at his school, hoping that he will get authority. He gets Rowley to sign up as well, and enjoys the benefits of being in the Safety Patrol, such as getting free hot chocolate. He tries to get a spot in the school's newspaper as a cartoonist, and teams up with Rowley. Greg comes up with a strip called Zoo-Wee Mama! Greg starts wanting to do other strips, but Rowley wants to continue with Zoo-Wee Mama! Greg submits his comics to the teacher, and ends up getting the cartoonist job. However, the teacher completely changes Greg's comic, even making his character a "curious student" instead of a "cretin."

After an incident where Greg chases some kindergartners with a worm on a stick and is mistaken for Rowley, Rowley gets fired from the Safety Patrols. However, after it gets cleared up that Greg was the real culprit, Rowley is re-hired and promoted while Greg is kicked off.

Greg notices that the school year is coming to a close and tries to get on the yearbook's Class Favorites page. He plans to go for "Class Clown," but his plans do not work out. At lunch, he gets an issue of the school newspaper, and learns that Rowley is the new cartoonist, with his Zoo-Wee Mama! strip left unchanged.

Greg confronts Rowley for not even listing him as co-creator and hogging all the fame. As they argue, the teenagers who chased them at Halloween appear and force Greg and Rowley to eat the Cheese. Greg lies that he's lactose intolerant, while Rowley is forced to eat the whole thing. The next day, when everyone notices that the Cheese is gone, Greg takes the fall for Rowley and lies that he threw it away. Greg reconciles with Rowley and lets people think that he has the Cheese Touch.

The book concludes with Greg getting his yearbook, seeing Rowley on the "Class Clown" page, and throwing it in the garbage.

Cropped screenshot of the online version

In 2004, FunBrain and Jeff Kinney released an online version of Diary of a Wimpy Kid. The website made daily entries until June 2005. The book became an instant hit and the online version, and had received approximately 20 million views by 2007. Many online readers requested a printed version. At the 2006 New York Comic-Con Kinney proposed Diary to Charles Kochman, Editorial Director of the ComicArts division of Abrams Books, who purchased the rights to the book. According to Kochman, the two initially conceived it as a book for adults, believing it would appeal to audiences similar to that of the TV series The Wonder Years. Kochman brought it before the Abrams publishing board, which convinced Kinney and Kochman that it would be better aimed toward children. In 2007, Diary of a Wimpy Kid, an abridged version of the original online book, was published.

Main page: List of Diary of a Wimpy Kid characters

The main character, Greg, has trouble with family, friends, and his local middle school. He is very concerned about how popular he is at school, and he daydreams a lot about being rich and famous when he grows up. He tries to fit in at his school, but usually he does not succeed. Facing many challenges, Greg attempts to handle them very creatively, but unfortunately his antics often backfire on him.

Greg's best friend has a larger than average frame. He is always willing to do what Greg tells him, including dangerous stunts. Rowley goes on vacations all the time, which annoys Greg. Rowley is a loyal friend, but he sometimes behaves in an immature or childish manner. He also dresses in an unusual way.

Greg's "spoiled" little brother, a three-year-old toddler. He never gets in trouble no matter what, even when he really deserves it. Manny is just getting toilet trained.

Rodrick is Greg's teenage brother and he never misses a chance to be cruel to Greg. He is known for sleeping excessively in the morning and for his rebellious attitude. Rodrick is part of a basement band (garage band in the movies) called "Löded Diper". Rodrick will do anything to embarrass Greg and will even cause problems for Manny to make everyone's life miserable. 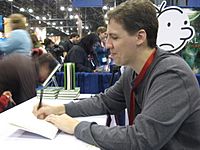 Author and illustrator Jeff Kinney signs copies of Diary Of A Wimpy Kid in 2009.

All content from Kiddle encyclopedia articles (including the article images and facts) can be freely used under Attribution-ShareAlike license, unless stated otherwise. Cite this article:
Diary of a Wimpy Kid (book) Facts for Kids. Kiddle Encyclopedia.