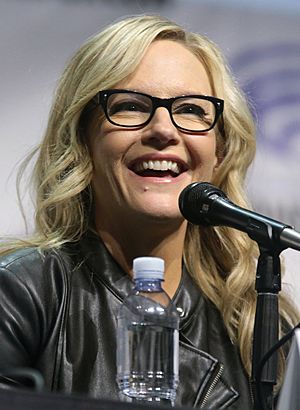 Harris at the 2017 WonderCon

Rachael Elaine Harris (born January 12, 1968) is an American comedienne and actress. She played Dr. Linda Martin on the show Lucifer. She played Mrs. Feldman's Friend in the movie Starsky & Hutch. She was also a guest star on television series, such as Reno 911!, The Good Wife and Sister, Sister.

Harris began in television on SeaQuestDSV in 1993. She later appeared in Star Trek: Voyager in 1997.

Harris played Susan Heffley in Diary of a Wimpy Kid and its sequels. In Wreck-It-Ralph, she voiced the character Deanna.

Harris was born in Worthington, Ohio.

All content from Kiddle encyclopedia articles (including the article images and facts) can be freely used under Attribution-ShareAlike license, unless stated otherwise. Cite this article:
Rachael Harris Facts for Kids. Kiddle Encyclopedia.