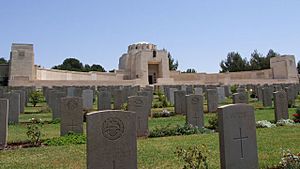 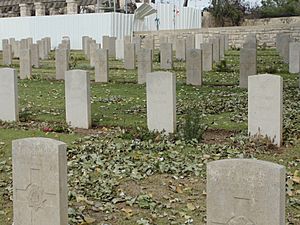 Jerusalem British War Cemetery is a British cemetery in Jerusalem (Jerusalem War Cemetery) for fallen servicemen of the British Commonwealth in the World War I in Israel.

The Jerusalem War Cemetery now contains the graves of 2,515 Commonwealth service personnel (including 100 unidentified). Units from Australia, New Zealand, India, Egypt, South Africa and the British West Indies are also represented besides those of the United Kingdom. A small number of German and Turkish dead also are buried at the cemetery.

The cemetery also contains the Jerusalem Memorial to 3,300 Commonwealth service personnel who died on operations in the same war in Egypt and Palestine and have no known grave. Its architect was John James Burnet and the sculptor Gilbert Bayes. It was unveiled on 7 May 1927 by Lord Allenby, who had been British commander-in-chief in the Middle East. The Memorial incorporates a chapel.

All content from Kiddle encyclopedia articles (including the article images and facts) can be freely used under Attribution-ShareAlike license, unless stated otherwise. Cite this article:
Jerusalem British War Cemetery Facts for Kids. Kiddle Encyclopedia.