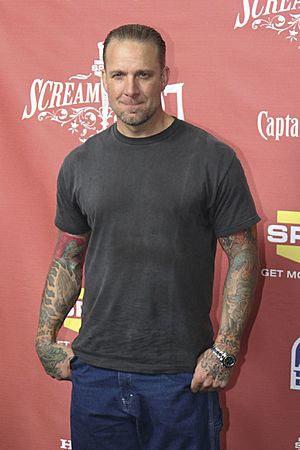 Jesse Gregory James (born April 19, 1969) is an American television personality and CEO of West Coast Choppers. He builds custom-made motorcycles. James is the host of Motorcycle Mania and the former television series Monster Garage on the Discovery Channel.

Jesse Gregory James was born in Lynwood, California to Larry and Carol James, the younger of two children. James says he is related to criminal Jesse James from his great grandfather's cousin. However, there is no evidence of it being true. James says he grew up in Long Beach, California, but that he did not spend his whole childhood there. James' parents divorced while he was still in grade school in South Gate, California. He and sister Julie moved to Riverside with their father, Larry James, and attended La Sierra High School.

All content from Kiddle encyclopedia articles (including the article images and facts) can be freely used under Attribution-ShareAlike license, unless stated otherwise. Cite this article:
Jesse G. James Facts for Kids. Kiddle Encyclopedia.