James Loscutoff Jr (February 4, 1930 – December 1, 2015) was a professional basketball player for the NBA's Boston Celtics. A forward, Loscutoff played on seven Celtics championship teams between 1956 and 1964.

Loscutoff was born in San Francisco, California, the son of Nellie George (Ramzoff) and James Loscutoff. His parents were Russian. He starred in basketball at Palo Alto High School, graduating in 1948. Loscutoff then attended Grant Technical College, a two-year college near Sacramento, California before proceeding to the University of Oregon. In his final season at Oregon, Loscutoff led the team in scoring and rebounding with 19.6 points per game and 17.2 rebounds per game. He still holds the Oregon school record for rebounds in a game with 32.

Standing 6'5", Loscutoff was selected with the third non-territorial pick of the first round in the 1955 NBA draft. He was originally drafted by coach Red Auerbach to provide some much-needed defensive nerve for the Celtics team, which (despite becoming the first team to average 100 points per game in the 1954–55 season) had one of the worst defensive records in the league.

During his rookie year, Loscutoff set a then-record for the Celtics with 26 rebounds in a game. In 1957, he sank the final two free throws of a 125-123 double overtime victory over the St. Louis Hawks that gave the Celtics their first NBA championship. 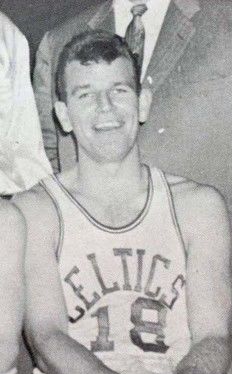 In nine seasons, from 1955 to 1964, he played forward and won seven championships as part of the legendary Celtics teams of the 1960s. Loscutoff was described as the Celtics hatchet-man, and his defense and strength were part of the defensive greatness of the 1960s Celtics, alongside Hall-of-Famer Bill Russell.

Loscutoff's nicknames included Jungle Jim and Loscy. The organization wished to honor Loscutoff, but he asked that his jersey number (18) not be retired, so that a future Celtic could wear it. Instead, the Celtics added a banner with his nickname "Loscy" to the retired number banners hanging from the rafters of their arenas. The number was later retired in honor of another Celtic great, Dave Cowens.

Loscutoff lived in Florida and Andover, Massachusetts, where his family owns a day camp for children. His wife was artist Lynn Loscutoff. He died in Naples, Florida on December 1, 2015 from complications of Parkinson's disease and pneumonia.

All content from Kiddle encyclopedia articles (including the article images and facts) can be freely used under Attribution-ShareAlike license, unless stated otherwise. Cite this article:
Jim Loscutoff Facts for Kids. Kiddle Encyclopedia.